"We think the time has come for us to have a Parish Magazine. It will be a record of past events, a notice of coming events, a means of promoting unity and goodwill among us, a means of keeping before our people the work which is being done by God among them and of interesting them in that work". Thus said the Reverend Buckland, minister of this parish in January 1894. The Rev'd Buckland was vicar of St Swithun's from 1891 to 1896.

These magazine covers are the earliest examples and show

Here we are 115 years later when the Church of England just happens to be celebrating 150 years of 'the Church Magazine'. So what did those early St Swithun's editions look like? Initially they were little more than the times of services, detailing of where the weekly giving was going and of forthcoming events - written from a church perspective. By 1910 the magazine was in the form of a pre-printed booklet with the same St Swithun's specific material printed on the front and back covers. The publishing house that produced this material was, and indeed still is called 'Home Words' as they are publishing material today of a similar nature. The bulk of this pre-printed content consisted of stories, topical household information and Christian based factual articles usually concentrating on mission of some sort. The cost is noted at 1/6d for the year or 1½d per edition.

As the years rolled by, the world social and political events impacted on the content and appearance of the magazine, particularly with the two world wars. After WWl local printing resources were very much reduced which resulted in the monthly magazine being handwritten. Up to and during WWll the Rev’d. Atkinson, minister at the time, served in the Royal Navy and his monthly words were written from his serving locations.

By the 1950's the Magazine, as it was still called, had changed - in size much nearer to the current version but with adverts for local traders featured within its pages. 'Home Words' had been replaced by printed material from the Bishop of Southwell's office. 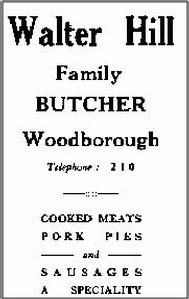 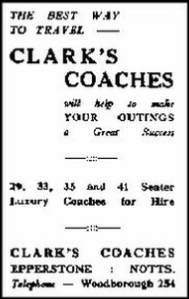 Shown above five local adverts that were typical of the era

In 1971, the publication became very much more focused on the affairs of the village. The professionally printed Diocesan insert had disappeared to be replaced by articles about the local clubs, societies and institutions. For the first time the Baptists and Methodist churches services and activities were featured with those early 1970's editions which ran to just eight pages.

Over the last couple or so decades, the Woodborough Newsletter has developed into a reliable source of village activity news and information that the editor and contributors feel is of advantage to its residents. There is determination that the magazine should continue to evolve as our perceptions and requirements change. In all sorts of ways, the Woodborough of today is vastly different from the Woodborough of 20 years ago, never mind that of 35 or 115 years ago. And yet, paradoxically, many things remain the same. This village retains it identity through the involvement of its residents in the many activities which happen here and the Newsletter in whatever form it appears is integral to this.

The magazine's appearance is no less an important factor in its readability, as is the price we charge. St Swithun's has always striven to be imaginative in the way the Newsletter is funded and in trying to make it an enjoyable and informative read. It is no less a topic for current consideration - to maintain the expectations of its readers and contributors.

One cannot help but wonder what Reverend Buckland's expectations were, when he determined to introduce a church magazine all those years ago - or indeed that we would be marking it 115 years later. 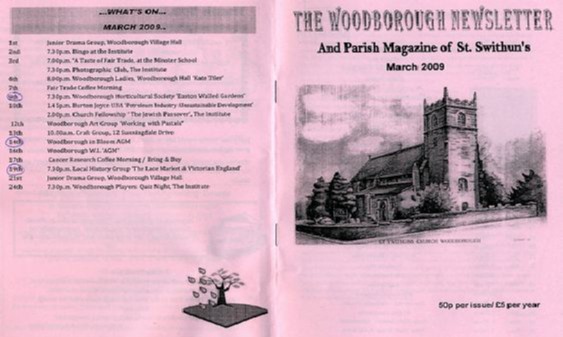 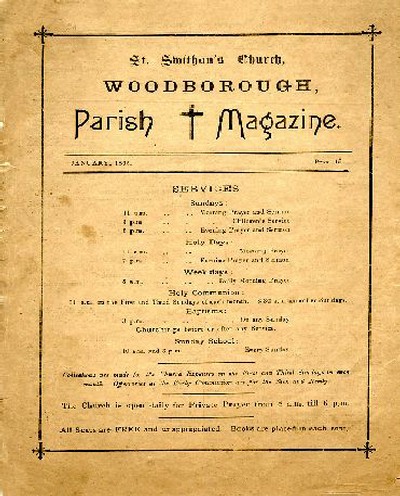 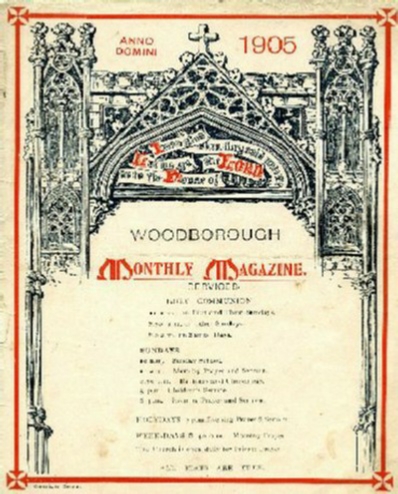 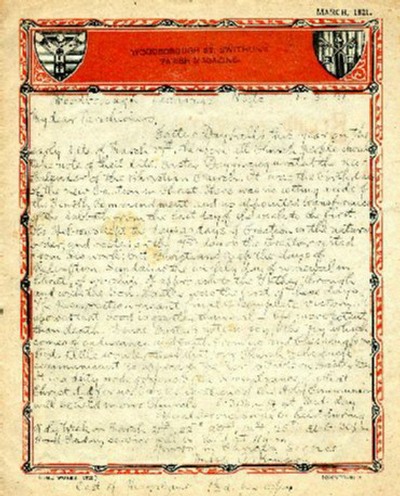 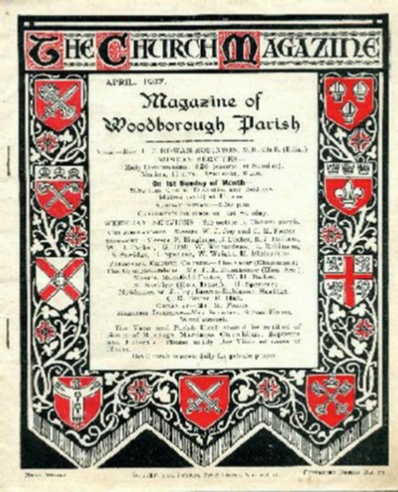 This front cover (above right) shows St Swithun's Church viewed from the north-west, but for many

years it was seen from the north-east. The back cover (left) lists coming events for the month.

Christian Duplicating Services continues to print the Newsletter. The current editor is Church Administrator Tracey Akehurst, she has introduced some design changes but fundamentally the Newsletter contains similar content from when she took over from David Bagley in 2008. David had been editor for over 20 years, since February 1986 when he took over from Peter Brayne, David decided to retire when he had a temporary, but serious illness. Ed 2009.

In the October 2019 edition, the Woodborough Newsletter’s current editor, Tracey Akehurst, announced that the Newsletter would cease publication with the December 2019 edition. It has lasted 124 years or at least it is thought to have done. The first Newsletter known to exist was dated 1895, (see above top left). It could have started though in 1894, but there isn’t any evidence to support this. There isn’t any evidence that it either was or wasn’t published during the two world wars. Please note the gaps in the table on the next page, but ask that they in them selves are not conclusive.

The illustration below is the cover of the final edition of the Woodborough Newsletter. 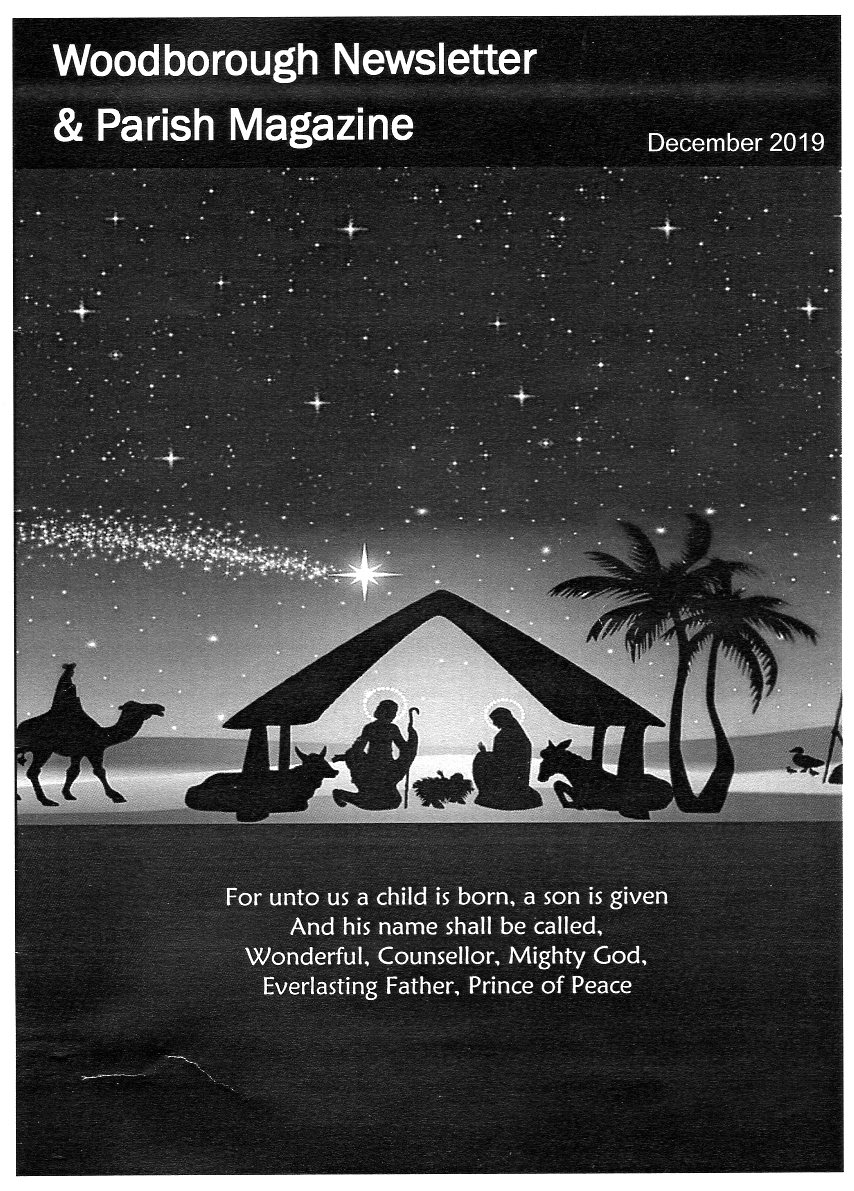