John Wood's father, Robert Wood of Lambley, had married Margaret Mountague, daughter of the Lord Chief Justice of England. Mountague had formerly been Ambassador at the Court of Louis XVI and had been a favourite of the French Kings. Later he built Boughton House, three miles north of Kettering, resembling a miniature Palace of Versailles, and brought back from France a fine collection of French furniture and china which the house still contains. With such a wealthy and famous ancestor it is not surprising that the Wood family in succeeding generations gave one of their sons the Christian name of Mountague.

John Wood of Lambley, and later of Woodborough, married Catherine Hewson of London, was appointed Recorder of Newark by Charles 1 in 1627, was a Verderer of Sherwood Forest and gave the church at Woodborough the beautiful oak Communion table now serving as the altar. John Wood was buried July 1645, Catherine buried July 1633. John's son, also named John, married Catherine Chaworth of Wiverton in February 1617 and their son Mountague who was now the heir married Bridget, the daughter of Richard Carrell of Thorpe in Surrey.

John, Mountague and Bridget's eldest son, looked after the estate, backed up by his spinster sisters as shown in a document dated 10 April 1704. However John died in 1709 and the estate may well have been leased out as Mountague and Richard were occupied elsewhere. Mountague was admitted to St Catherine Hall, Cambridge 27th May 1678, aged 17, matriculated in the same year, and became B.A. in 1681/2 and M.A. in 1685. He was ordained Deacon at Lincoln in September 1685 aged 25 and Priest in 1686. He became Rector of St Michael Paternoster Royal in 1687, with St Martin Vintry in 1703. Woodborough leases to tenants show he was at St Antholins in 1728. He was Canon of Wells Cathedral from 1705 until his death on 16 July 1741. The three parishes of St Michael Paternoster Royal, St Martin Vintry and St Antholins were all within the City of London. Journeying from London to Woodborough at that time would have been an arduous affair.

Mountague's younger brother Richard became Rector of Gedling in 1703 and died in 1734 aged 70 years. At the time of his death only Mountague and Catherine outlived him, Catherine being 83 and Mountague 74 and Richard appointed them executors in his Will. On Richard's death Catherine and Mountague probably realized that as none of their brothers and sisters had married and had children the name of Wood would disappear in the village. It is obvious from the involvement of all of them in the affairs of the manor and village, and the academic attainments of Mountague and Richard that they must have received a good education and what better way of perpetuating the name of Wood than by founding a school in the village. Some schools were named after individuals but Woodborough School does not bear Catherine or Mountague's name - simply that of Wood. Catherine died in November 1738 aged 86 and Mountague in July 1741 aged about 81. The Wood family had held the Middle Manor for 134 years. Mountague's next of kin was his cousin German Jane who was married to William Edge.

George Lacock, a solicitor, had purchased the Upper Hall from the Woodborough branch of the Strelley family in 1640. Ralph Edge, a Nottingham lawyer, managed to purchase most of the Strelley estates belonging to the Strelley branch of the family by 1651 and was in possession of the rest of the estate by about 1682. After Ralph Edge's death in 1684, the estate passed to his cousin's son, Richard Conway, who changed his surname to Edge. Twice more over the generations there was no direct male heir and the estates passed through the female line. One of the heiress's husbands changed his surname to Edge, the other added Edge to his original surname.

William Edge’s wife Jane inherited the Middle Manor but died in October 1777 and William married again in 1789 to Mary Palin, spinster of Woodborough. William died in 1796.  In the Enclosure Award for Woodborough the Manor and its properties were allotted to John Taylor.

This John is the first of several Taylor family members or generations to own the Manor. A date in the brickwork at the end of a former barn gives the initials and date WT 1851 which probably belonged to a William Taylor who had the barn constructed. Most probably John Bagshawe Taylor was the last of the Taylor family to own the Manor. On the south front of the west end of the stables is a date stone bearing the initials JBT 1858 which would seem to confirm this. The Woodborough censuses show that the Pinder family was occupying the property, Joseph Pinder being the farm bailiff from 1860 until about 1875. John Bagshawe Taylor's address is given as Radcliffe on Trent. 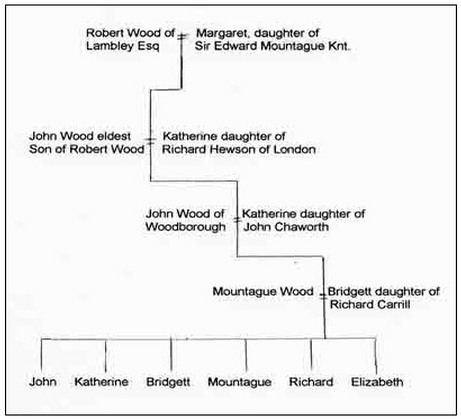