There are records that Woodborough had an annual flower show although no evidence has been found to confirm when the Flower Shows started being a feature of the social calendar. They would have been held in the Parochial Hall on Lingwood Lane, or in St Swithun's Church. The following extracts have been taken from Woodborough Newsletters between 1953 and 1966 and give some idea of the local people who were involved. [Ed 2005].

1953: This was held on 5th September 1953 and was well supported. By the courtesy of Mrs Potter, Mr Arthur Hind put on an attractive display, and due to the generosity of the bidders at the auction and donations in cash and kind, the result for the Hall Fund was £41 7s 3d. The thanks of those who enjoyed the Show are due to the Committee, to Woodborough Band, and to all those who helped with tea and with the side-shows. Mrs Nora Parr won the Robinson Rose Prize and Mr Dennis Richardson and Charles Foster “Points” Prize. Flower Show accounts receipts of £64 1s 7d and payments of £22 14s 4d and the balance of £41 7s 3d for the Hall Fund.

1954: A good many people worked hard and I think enjoyed themselves in so doing: a good many people were also in a generous mood both at the Auction and in returning Prize Money—that helped a very great deal. The Woodborough Band very kindly gave their services again. To Mrs Potter are due our especial thanks for the floral display and the gifts of plants: and to Pearsons of Lowdham for the gift of magnificent gladioli. And I often wonder what we should do without Mr Cyril Roe’s transport on this and other occasions. Congratulations to Mr Harold Richardson on winning the Robinson Rose Prize and to Mr Dennis Richardson on gaining the Foster Smallholders’ Prize. Receipts of £56. 11. 0d and expenses were £13. 9. 4d.

1955: This year a new prize was competed for, the Carnill Cup for the most points. This was won by Mr Walter Wright, the Mrs L.E. Robinson prize for roses by Mr Bob Rowlson, and the Charles Foster prize by Mr J. Snowden. 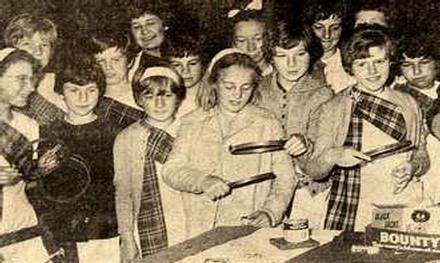 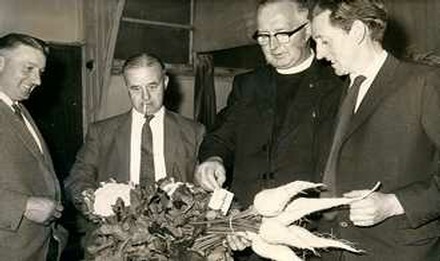 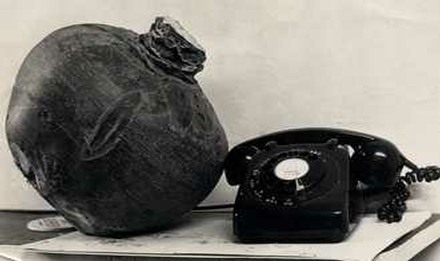 1966: An entry of more than 260 in Woodborough’s Vegetable, Fruit and Flower Show held on Saturday 3rd September approaches the record, and in spite of the bad summer, the general standard of exhibits was high. Judges, Messrs F. Stafford and L. Reid of Mapperley Hospital commented particularly on the excellence of the tomatoes and runner beans shown, and Mrs R. Milward of Cotgrave, who judged the Ladies classes, considered the standard higher than the first year.

The sunshine drew a good crowd, the majority of which stayed for the auction of produce and altogether the Show was a great success resulting in a profit of £44 towards the Parochial Hall funds. The Hallam family of Main Street wiped the board as regards trophies with Mrs W. Hallam winning the Carnill Cup for the most points and Mr C.P. Foster’s prize for the most points from a garden of less than half an acre, and her son Tony, the Tomlinson Rose Cup. Jane Andrew of Chapel Garage won the six rose trees for lucky number admission ticket. The Vicar, the Rev. A.R. Hayward, spent a large part of the afternoon in the Pillory, with people shying wet sponges at him for sixpence and the sponges did not all miss.

In August 1975, the Woodborough Community Association (WCA) broached the idea of having an annual flower, fruit and vegetable show. September 1975 saw the first such show taking place with entries for flowers and vegetables with a craft exhibition in the Church.

March 1976 saw the planting of sunflower seeds for a competition to be held later in the year for the tallest sunflowers. A second autumn show was also arranged, a grand affair, this time in Governors’ Field with flower and garden produce. Included in the event was an exhibition of plants and flowers by Timmermans Garden Centre, a display of local pottery, a craft fair in the Church, a welly-wanging competition and a concert given by the Calverton Colliery Band.

Following the 1976 Autumn Show came the formation of the Woodborough Horticultural Society when the Community Association proposed the Horticultural Society become a separate entity. In July 1977 the WHS was formed and took responsibility for the various shows that were to follow. The WHS was affiliated to the Royal Horticultural Society by January 1978. The first show was the Spring Show held on the 15th April 1978 which made a small profit of £77.79. On 9th September that year, for the Autumn Show, classes being flowers, vegetables, floral art, handicrafts, jams and baking, wines, children’s and allotment holders. Other attractions were raffles, tombola, skittles, teas, and welly-wanging.

December 1978 there was a talk on wines – with samples. 1979 saw the first Spring Show on 21st April followed by a Rose Show in June. There was a talk on freezing and preserving in August and the Autumn Show in September now following a pattern. The first AGM was held in November and a talk on bee keeping in December. 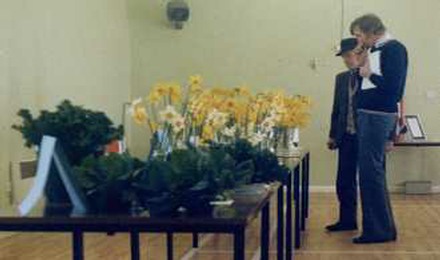 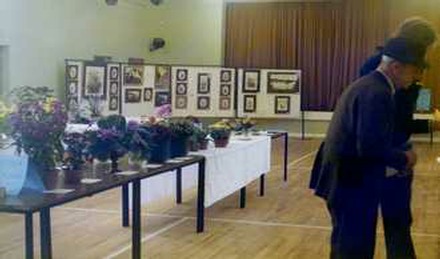 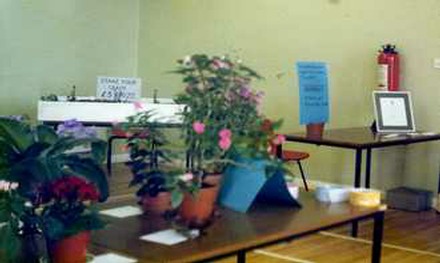 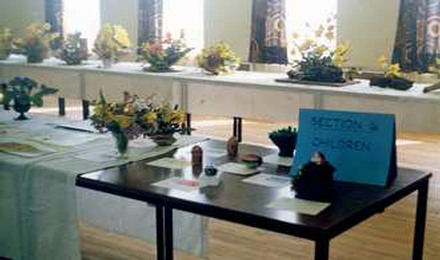 Some of the entries in the 1978 show held in the new Village Hall on Lingwood Lane. 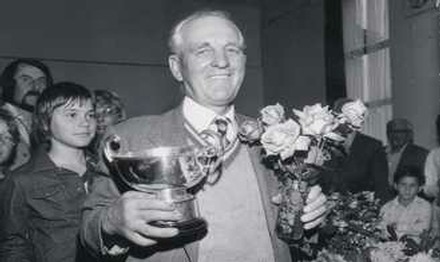 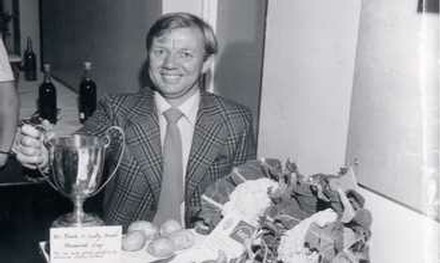 Throughout the 1980’s and 1990’s the format of Spring Shows in April, Rose Show in July and Autumn Show in September became the pattern and a variety of talks and outings of a horticultural nature included in annual list of events.

By 1983 there was a Rose and Pea Show (July) and a Leek and Onion Show (in October). 1984 saw the start of an inter-village competition and a three-way quiz between Woodborough, Lowdham and Burton Joyce Horticultural Societies. 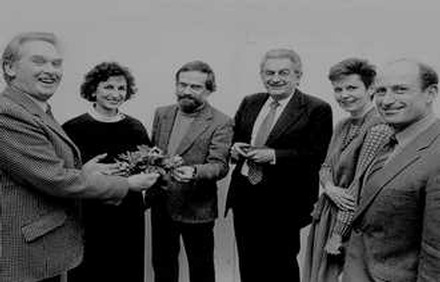 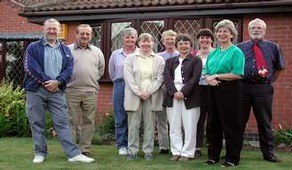 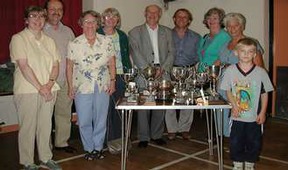 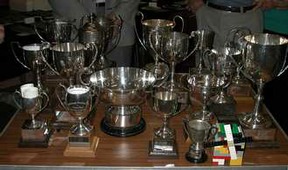 So now into a new century and a new millennium, our well-tried formula of shows and talks are still going strong, little bits change and different items are included, mainly in domestic and children’s sections, but vegetables and flowers are affected by weather and show date, which keeps everyone on their toes. The Society's 25th Anniversary was held during the Summer Show in July 2002. 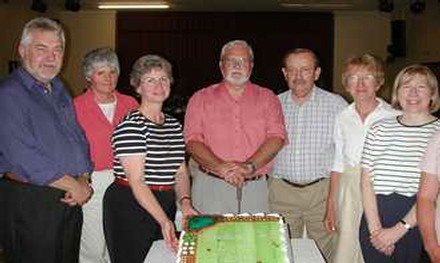 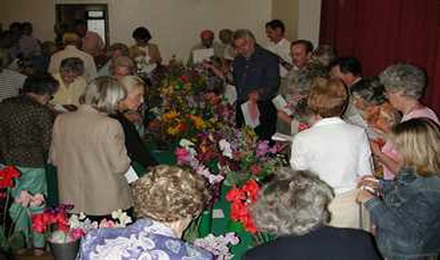 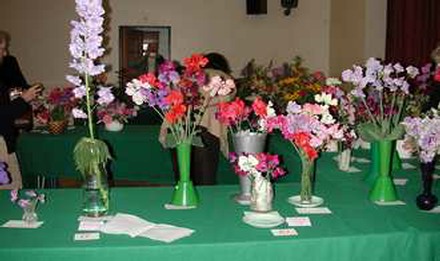 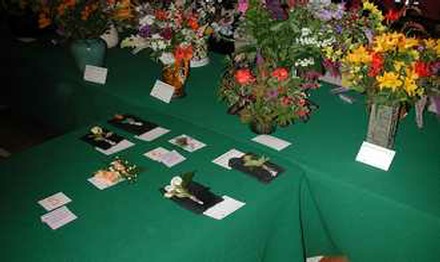 2002 saw the 25th anniversary of the Society at the summer flower show held in July,

top left the committee with a special 25th anniversary cake. 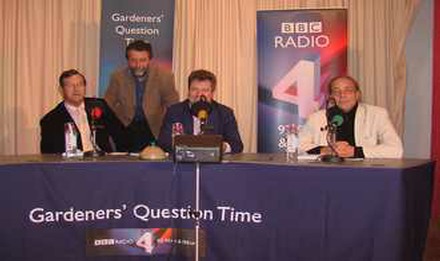 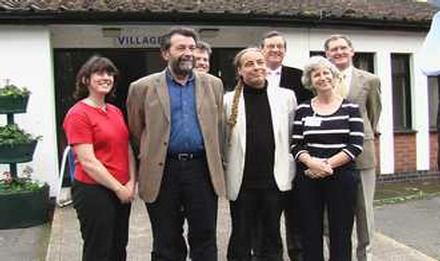 In the summer of 2006 the WHS hosted BBC Gardeners’ Question Time to a packed Village. Hall. On the right WHS members, Heather Kirk, Jill Hicking & Paul Reed with the Question Time team.

For programme of events see: www.woodboroughweb.co.uk