The Sycke Dyke flows from the fields south of the village and joins the Main Street dyke at an underground T-junction in front of cottages at 124 and 126 Main Street. On Saturday 16th January 1999 after a continuous heavy downpour the water levels in Woodborough dyke and the Sycke Dyke rose so high that severe flooding occurred on the Main Street at the point where the water courses meet. The force and velocity of water was so great that the open culvert could not withstand this volume of water. The result was that the water backed up the Sycke Dyke and rose to a height of approximately 6 ft and backed upstream from the Woodborough dyke which had already broken its banks. 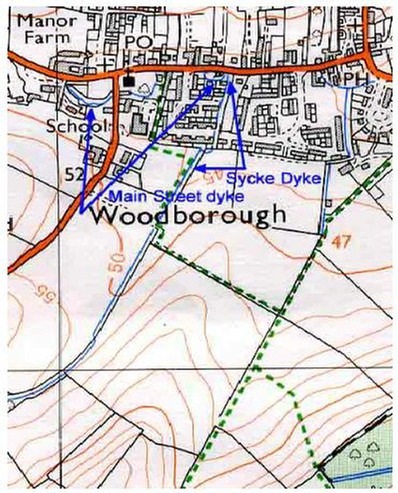 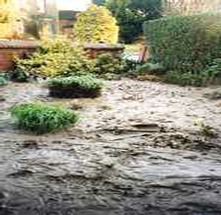 The photograph above right shows a roadside boundary wall to property at 124 Main Street; the effects of passing vehicles through flood water can clearly be seen.

On the right mud and debris left in the garden after the flood waters subsided, this view is looking towards Main Street with 'The Yews' opposite. 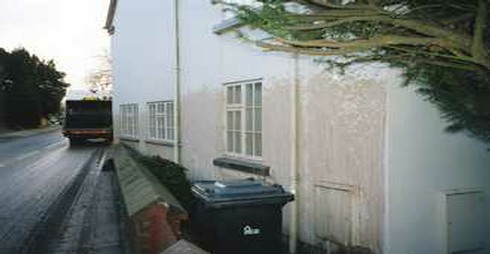 where it meets the Main Street dyke. Map Pathfinder 813 courtesy of the O.S.

The Main Street flooded for about 500 yards, five houses were completely flooded and nine gardens covered with mud and water. When the dyke rises to 6 feet of water the full force of water is immense and will uproot any obstacle in its path. This account is only one instance of many other similar occurrences.

The Sycke Dyke stone wall collapsed at the culvert junction leaving a gaping hole, which undermined the surrounding area of garden and hedge along Main Street.