In August 2004, retired farm manager and long-time resident of Woodborough, David Rose wrote the following account of farming practices that might affect or create flooding in Woodborough.

Woodborough is no stranger to floods. The village lies in a three-sided valley there has always been a problem of water draining down to the valley floor where Main Street runs alongside the Woodborough dyke. Hills surrounding Woodborough start from a low point of 125 feet above sea level along the village, rising to 350 feet to the east 450 feet high to the west at Dorket Head. This is at the far end of the parish boundary some two miles from the village and is one of the highest points in the county.

Prior to 1900 almost all the surrounding hills and meadows were permanent pasture land which soaked up excess rainfall, slowly draining into the dykes in the valley below. At the onset of the First and Second World Wars a substantial acreage of land was ordered to be put under the plough in the “Dig for Victory” campaign. The most fertile land in the valley near the village was used extensively for growing market garden crops. 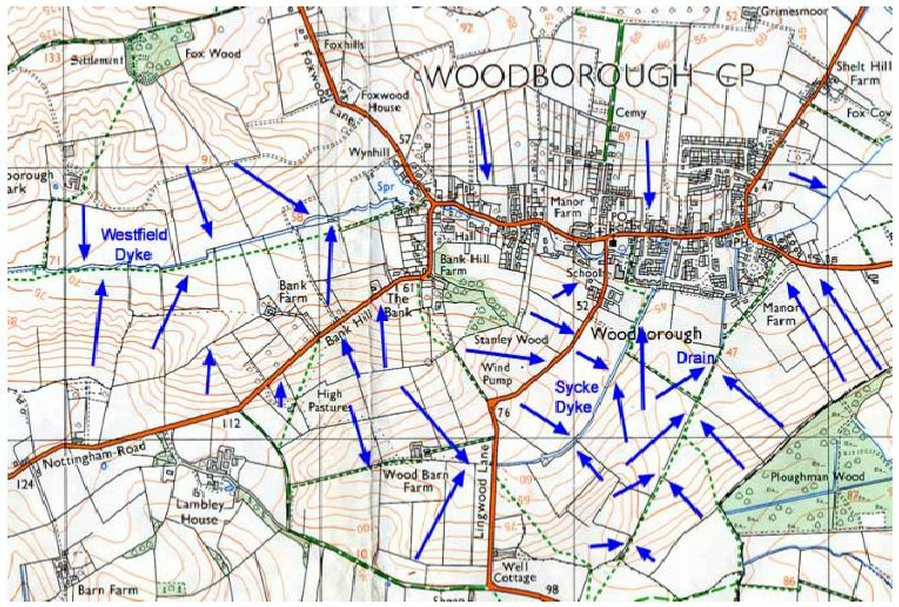 Flooding has always been expected and there is evidence along the “Sycke Dyke” to the east of Lingwood Lane of two sets of sluice gates that were closed when flooding was likely, forcing the excess water onto some 50 acres of level grassland which, on slowly receding, deposited valuable silt onto the fields. This in turn alleviated pressure on the main dyke along the village main street.

During the last 25 years cropping rotations have changed dramatically and now much of the land is ploughed and crops sown in early autumn. This results in an unstable soil condition, aggravated by “tramlines” (to enable more accurate spraying and fertilizing) which are usually marked out up and down the slope of the field so that tractors can use them, but these make an ideal channel for rapid water run-off.

Individual farmers used to pay much importance to the management and maintenance of land-drain outfalls and ditches. During autumn and spring gales many branches from willow and ash trees are broken off and if not removed from waterways can cause blockages of culverts and grids. However, hedges and ditches are now maintained with mechanical hedge cutters where all the material is pulverized and left on, or in, the ditch and consequently washed down the dyke when the winter rains arrive. Due to the now depleted labour force in agriculture and lack of local knowledge of water courses, many ditches and dykes are no longer properly maintained and are becoming silted up. The main dyke which flows through Woodborough was once open for the main part of its journey through the village and was maintained by a road-man [Fred Musson] who kept it clear of debris and weeds.

During the 1960’s most of the dyke was piped and culverted to enable Main Street to be widened. During excess rainfall the rate of flow is greatly increased within the culverts and bursts out with great force, spilling out where it is still open, as it is at the west end of the village near the Bank Hill junction. Particular danger points are at the east side of the church where the water has to re-enter the culvert via a grid near the old Co-op Store and just beyond where the Sycke Dyke also joins the Woodborough Dyke, running down from the slopes below Ploughman’s Wood. Flooding can be extensive here and adjacent buildings have often been inundated. Little Chimneys, the cottage owned by the late Jane Turner, but since demolished in 2000, is reported to have had its garden under water on twenty occasions and the cottage swamped at least four times during Miss Turner’s lifetime.

Because of the topography of the surrounding area, the village is always, if not more so now, vulnerable to periodic severe flooding.

It is interesting to consider the following formula that one inch of rain is equal to 100 tons of water per acre and one gallon of water weighs 10 lbs.