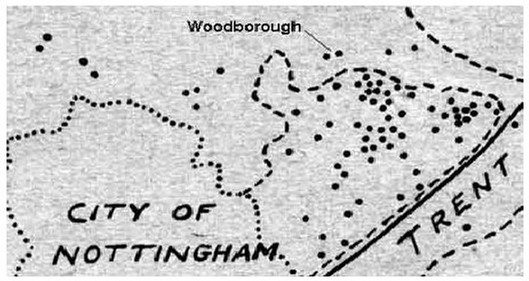 The above 1942 plan shows orchards located on the north west side of the River Trent and to the east of Nottingham, each dot represents an orchard. This is part of a larger plan for Nottinghamshire. 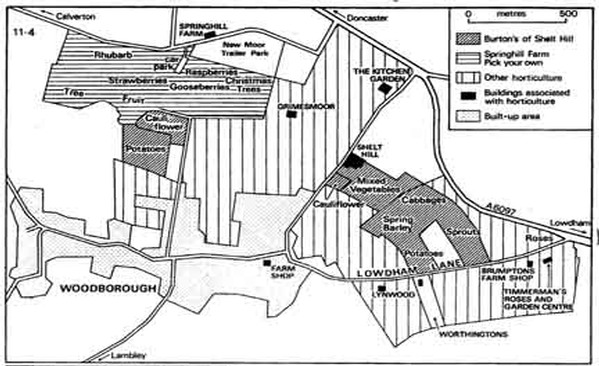 With particular reference to Woodborough

The following article written by K. C. Edward's, M.A., F.R.G.S., of University College, Nottingham, is taken from the July 1942 issue of 'The Nottinghamshire Countryside' published by The Notts Rural Community Council. Whilst the writer discusses orchards throughout Nottinghamshire, there are references to Woodborough and so it is relevant to include it on our website.

THE ORCHARD LANDS OF NOTTINGHAMSHIRE

FRUIT GROWING, though of some importance locally, is not carried on extensively enough to give Nottinghamshire a place among the principal fruit producing counties. The area under fruit in the county is about 2,500 acres -- or less than 10% of the total fruit acreage of England and Wales of which nearly 2,000 acres are in the form of orchards, chiefly of apple, plum and damson trees, while the remainder is under small fruit, mainly strawberries, gooseberries, black currants and raspberries. These figures are in sharp contrast to those of Hereford, for example, a county of similar size, famous for its apple orchards, in which the acreage under fruit is ten times as great. In the Isle of Ely, a small region of intensive fruit production, the acreage under strawberries alone exceeds the total fruit acreage of Nottinghamshire. On the other hand the neighbouring county of Leicestershire, which is only a little smaller in extent than Nottinghamshire, has only one quarter as much land under fruit.

The distribution of orchards on the East and North-east side of Nottingham is shown in the accompanying map. Each dot on the map signifies 5 acres of land under orchard fruit (data, obtained by permission from the parish returns of the Ministry of Agriculture), and, the dots are placed so as to indicate as precisely as possible the location of the orchards, reference having been made to the one-inch sheets of the Land Utilization Survey. Of course throughout the county there are numerous small orchards and gardens with fruit trees, chiefly attached to farms, which are not of commercial importance and are therefore not included.

It will be seen that the bulk of the orchard lands fall within a harrow belt running through the whole length of the county from north to south and lying a little to the east of the central axis. In addition some orchard land is found scattered around the northern outskirts of Nottingham and to a lesser extent near the Derbyshire border, between Mansfield and Worksop. The main belt however closely conforms in extent to that of the geological division known as the Keuper or Red Marl, the surface boundary of which is also shown on the map. About 70% of the orchards are situated on the Red Marl and from this it appears that the fruit trees show a preference for the firm clay soil derived there from, though it is not an easy matter to generalize concerning the soil requirements of orchard fruit. Indeed many orchards are found on the lighter land of the Keuper Sandstone (waterstones), which forms an irregular fringe along the western margin of the Red Marl belt and penetrating into the latter along the principal valleys. Much of the fruit in the Woodborough district near Nottingham is grown on this soil as well as that in the neighbourhood of Farnsfield (Edingley, Kirklington, etc). On the other hand there is scarcely an acre of fruit over the entire tract of thin sandy soils, which support the Forest region in the west central part of the county or upon the stiff retentive clays of the Vale of Belvoir in the southeast.

It will be seen from the map that the Red Marl belt is broken into two parts by the Trent Valley. Curiously, orchard land is found predominantly in -the Western portion, there being only about 150 acres east of the Trent compared with 1,250 to 1,300 acres to the west. This is doubtless partly due to the fact that the area to the west of the river is better placed with regard to consuming centres and lines of communication. It may also be due to the soil locally being not quite so heavy as in the eastern part. On the whole apples, plums and damsons require well drained land which has at the same time sufficient retentiveness to ensure moisture in summer, poorly drained soils cause harm to the roots of the trees particularly in Winter. The apple as a rule does not thrive on really heavy land, being liable to canker, whereas plum is least successful on thin, light soils. Both therefore find suitable conditions on the Red Marls of Nottinghamshire provided the tilth is moderately free working. Adequate drainage is generally ensured by planting the orchards on slopes, often southward - facing to obtain the maximum sunshine. Small fruit too, such as, gooseberries, often respond to similar conditions and the under-planting of orchards by such crops or by rhubarb is sometimes practised, as at Woodborough and Tuxford.

The Trent valley itself is unimportant for fruit, there being less than 50 acres devoted to its production. While soil conditions may account for the distribution of fruit growing in general terms, the actual location of orchard lands in the county is determined in a large measure by the economic factors of transport and market. Orchards tend to be situated within reach of a railway station or near a main road. Thus in the Red Marl belt to the west of the Trent, four concentrations of orchards occur. These in order from north to south are as follows:

The first three of these districts are situated in the vicinity of important routes, both road and railway, which strike across the county to thickly populated regions beyond affording suitable markets. Thus each of the first two has ready access to the main line of the L.N.E.R. (London North Eastern Railway) from King's Cross to the North, the one at East Retford and the other at Tuxford, as well as to the Great North Road which closely follows the railway through this part of Nottinghamshire. Through these districts lines also run Westward to Sheffield and Manchester as well at to Chesterfield and other parts of the Derbyshire coalfield. The Southwell district, besides being neat to Nottingham, is on the route from Newark to Mansfield. The developments upon the coalfield and the consequent growth of Mansfield provide a valuable market for the grower in this district.

The Woodborough and Lowdham district, within a few miles of Nottingham, is concerned almost exclusively with the city markets. It has enjoyed some prosperity at the expense of a considerable number of orchards and fruit gardens formerly on the outskirts of the City, which in recent years have been engulfed and destroyed by the growth of the suburbs.

The Tuxford district is the largest of the fruit growing areas and includes the parishes of Askham, East Markham, Markham Clinton, Tuxford, Egmanton and Laxton. East Markham holds the distinction of being the parish with the largest acreage of orchard land in Nottinghamshire. Plums, apples (especially Bramley Seedlings), gooseberries add strawberries are the chief types grown. During the season there is a vigorous traffic to Doncaster, Sheffield and other parts of the West Riding, to Manchester and to the Derbyshire coalfield. In the past, in good years marked by a glut of fruit, small quantities have been sent to Covent Garden. The loading of the fruit wagons at local railways stations, done mostly at night, reaches a feverish haste and the moving of more than 30 tons a night at these stations was not uncommon some years ago but road transport organized by wholesale fruiterers, has since reduced the shipments by train.

On the Red Marl east of the Trent the chief areas for fruit production are at Bingham and around Newark. The former noted for its plums, is situated only a few miles from Nottingham either by road or by railway to Grantham, and accordingly servers the city market.

What is the present trend in fruit cultivation? During the period 1935-40 while the total area devoted to fruit production in the county remained more or less the same, noticeable changes in acreage occurred among individual districts. An increase in acreage, particularly around Tuxford and East Markham, was a feature of the northern districts, while on the whole the reverse was the case in the southern districts, with the exception of Lambley and Woodborough parishes, near Nottingham. Decline in acreage was not however confined to the southern part of the county, for in a curious manner, individual parishes in a district of increasing fruit acreage, showed a reduction. Such were Askham and Laxton in the Tuxford district, the process of gain and loss within the same area possibly being due to the decay and clearance of old orchards in some parts and the establishment of new ones in others. The largest area of reduced acreage was that between Nottingham and Newark, affecting eight contiguous parishes and thus involving parts of both the Southwell and Woodborough districts. Here there was less evidence of the adjustment of gain and loss between one locality and another and the decline may well persist. There is little doubt that here as in other localities many of the orchards are too old and neglected. With the exception of individual growers here and there, these districts have passed their heyday and a general revival could only be brought about by extensive reorganization and better marketing prospects.

In Nottinghamshire the grass orchard is customary and gives good results, ensuring, it is claimed, perfection of colour in the case of the apple crop. Smaller orchards are often grazed by poultry, but under-planting with small fruit is seldom found, scarcely 150 acres being treated in this way. Since large-scale growers are few there is an increasing tendency to combine fruit production with market gardening and worked in this way the orchards of the county will doubtless survive. The Nottinghamshire grower has contributed substantially to the progress of fruit cultivation, for a number of widely known types originated in the county. Among them is the Bramley Seedling apple (the parent tree of which may still be seen at Southwell), the Laxton strawberry and the Merryweather damson. To maintain this standard of enterprise in the future will largely depend upon the reliability of favourable market prices.

The above plan is not connected to the writer of the main article, but it is included because of its relevance to past fruit farming locally. It was published in 'A New Geography of Nottingham' in 1984, it shows the extent of fruit farming in and around the village at that time. By 2005 there were no longer any commercial fruit growing farms or market gardens. Springhill Farm was sold for development into a golf course; various other growers have sold their land allowing it for either grazing or have retired.