Dykes and drains have been part of the landscape for countless centuries, if there are hills and valleys and rainfall it is inevitable that rainwater will drain somewhere, it therefore finds the lowest level to drain into, thus streams and rivers form, this is elementary of course.

The Woodborough Enclosure of 1795 sets the scene for what follows. In the late 1700's it was decided to formalise the management of the countryside by first of all identifying dykes and drains, then dictating how they should be managed. Read Peter Saunders research in greater detail by using this LINK Woodborough Enclosure 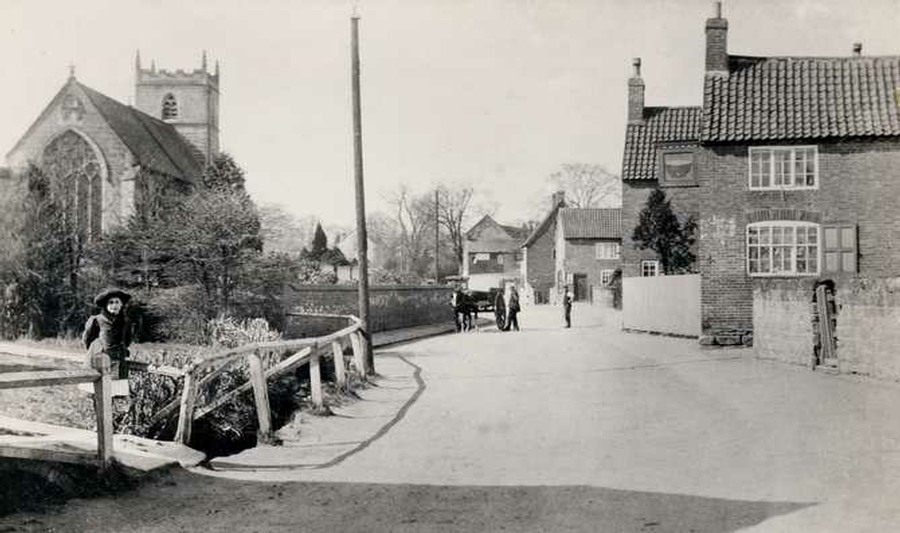 Here in the centre of the village ‘Town Dyke’ can be seen on the left, running along Main Street 1912.

And we do further award order and direct that the respective Owners or Occupiers for the time being for ever of all and every Fences and Fence Drains and Drain now made and hereafter to be made and through which all or any of the said public private and Foot ways herein before set out and awarded doth or shall pass or lie shall make and place and for ever maintain and keep in good repair good and sufficient Planks or Foot Bridges over and across every such Drain and good and sufficient Stiles and Planks or Foot Bridges in and across every such Fence such stiles not to exceed in height three feet. And with respect to the Draining and carrying the Water from off the lands intended by the said to be inclosed We the said Commissioners have caused to be made the following Drains or Water courses through several parts (that is to say) :-

From the Woodborough Enclosure Act 1795

An extract from a section of the
WOODBOROUGH ENCLOSURE AWARD 1795
detailing the allocation of drains.

Dykes and watercourses to be kept open and unobstructed [Summary].

2. Town Dyke - this appears to be the one, which starts near Fishponds Close and comes into the West end of the village at the corner of West Fields.

3. From Deadman’s Close, down through the West Fields to join the Town Dyke on West Fields (this starts along Woodborough valley level with Park Farm).