Non-Conformists: A Congregational meeting place was licensed in Woodborough in 1672, with a Declaration of Indulgence being issued, but this was withdrawn in 1673. The next record of Non-Conformism is in 1812, but unfortunately there are no details.

In 1812 the Wesleyan Methodists began preaching in a cottage at the top of the village. According to Rev’d. Buckland, the then Vicar of St. Swithun's, a house occupied by Miss Lee (The Homestead) was licensed for preaching, with only three members at the beginning! A Sunday school was held in a workshop at about the same time, this being on a site near the centre of the village, later occupied by the Co-operative Store, (The Post Office & Woodborough News occupy these premises today). By 1826 membership had risen to the point where a new building could be considered and by incurring a heavy debt a Chapel was built in Roe Hill, this is now The Institute. It seated 150 people but by 1880 it was in need of repair and could not be extended. The population of Woodborough by now was about 780 and a firm decision to create a new building was taken in 1883 when a Birmingham architect, William Lee (a descendant of the inventor of the stocking frame), offered a 400 sq. yard site on the corner of Roe Lane for £20. He drew up the plans (without charge) and the site was purchased from him in April 1886. A tender from Haslam & Carnill of Lowdham was accepted in June 1887. The cost of the building was £555, but other work, including underground hot air heating raised this to £601. Work soon started and the formal opening took place on October 25th 1887. Newspaper reports on Tuesday 26th July 1887 of the stone laying also give more historic detail about the Wesleyan Church of that time.

The Wesleyan Chapel left in 1955 and right under going some alteration in 1966.

The new building was 26 feet by 46 feet, of which 28 feet comprised the Chapel, seating 170, and the rest a Schoolroom to hold 100. It was described as a semi-gothic plain structure in red brick with a stone dressing. It had cathedral tinted glass in the windows, a porch with double doors and since there was no gas in the village then, illumination by paraffin lamps. Final building costs were £628, of which £273 had been raised by March 1888. A bazaar in 1884 had been the most successful event, raising £72 and the debt was finally cleared by November 1897. A feature of the altar was the shutters behind it could be raised to allow for the altar itself to be pushed further back usually for Circuit gatherings. The old Chapel (now The Institute), was to have been sold to help pay for its replacement but was eventually let to the Vicar of St. Swithun’s at a rent of £5 per year, for the benefit of the villagers. In 1894 it was in use as a non-sectarian Reading Room and was sold in 1896 to local villagers, Joseph Clayton, William Southern and Elijah Wright for £75. 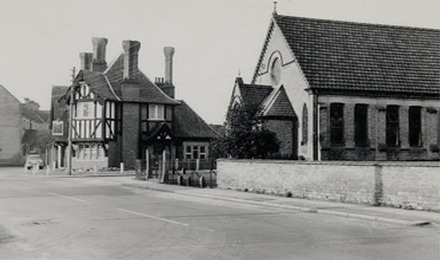 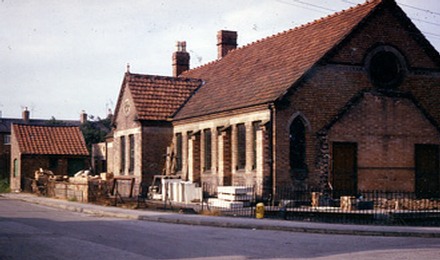