In 1968 the Woodborough Community Association canvassed the over 60’s at a meeting in the Parochial Hall on June 12th to find out if there were any requests for a social group aimed at that age group and the result was the formation of the Wednesday Club. Thus called because it was held on a Wednesday! 16 people attended the first meeting.

Mrs Reavill of Ploughman Avenue was elected treasurer and Mrs Brackenbury, secretary. It was agreed that the subscriptions should be one shilling per week per member and that a raffle would be held to help defray costs.

Just two photos of Wednesday Club members, many more can be found in our Themed Photo Albums

By the end of October there was £11 in the “kitty” and plans were afoot for outings, teas, etc. The evening sessions were mainly games, darts, cards and bingo. A cup of tea and cakes were served half way through, and towards the end of the evening Sid Jackson, of Lowdham Lane, usually came up to play the piano for a sing-song.

The afternoon sessions were a similar format except that everyone called it a “knit and natter session”. Quite a lot of the ladies sat knitting and talking, some played cards, and Pam Simpson of Lowdham Lane, who was a hairdresser, would come along and either cut, wash or perm the ladies’ hair. This proved exceedingly popular and an appointment system had to be instigated.

Both day and evening sessions were well attended. The small subscriptions went towards the provision of tea, milk and sugar etc., and the helpers would take it in turns to make cakes.

Outings were always in the afternoons, starting from Woodborough at 1.30pm and returning about 6pm. The highlight of the afternoon was the tea. These afternoon outings were to places like: Stapleford Park, Derbyshire, Twycross Zoo, Black Country Museum, Belvoir, Sudbury Museum of Children, Belton House and Chatsworth, Nottingham Theatre Royal, Nottingham Playhouse.

From all the trips, one of the most memorable was a coach trip to Stapleford Park. It was a beautiful hot summer’s day in June. The day had been carefully planned. As a lot of people had difficulty in walking there was to be a ride on the small train down through the grounds to the lake, returning in time for tea at 4 o’clock. It took quite a long time to get everyone settled in the train as the seats were small, and some of the people rather large. However eventually it was all sorted out. It was a beautiful ride down to the lake through the grounds. When the lake was reached “Wednesday Club” were to stay on the train for the return journey. Half way back up the track, on a gradient, the train broke down and the driver shouted “Everyone out to push”! It was explained that “Wednesday Club” members were physically unable to do this so he said “Well, all the able bodied ones then”, which just left the helpers. Pushing was done by Vicar Ross Hayward, Elsie Leafe, Maureen Brackenbury and about two more and the train was pushed back to its terminus.

When Mrs Brackenbury left the village in 1994 Mrs Nora Clarke took over the running assisted by Mrs Brenda Spencer. Mrs Pauline Lawson joined in 1998 and ran a quiz to add to the usual cards, dominoes and bingo. In 2000 Mrs Margaret Freeman joined.

Members and friends also enjoyed some lovely outings by coach organised by Nora and Brenda. We also had a few parties to celebrate anniversaries and birthdays.

Sadly we had to close the Wednesday Club in 2003 due to lack of numbers. 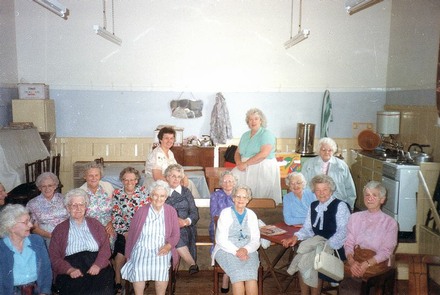 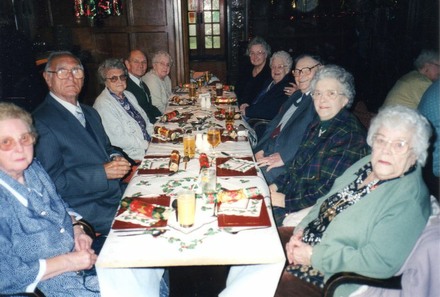