Foreword provided by Nottinghamshire Archives - 8th July 2010: The document of 1335 is a ‘gift’ which was the main medieval deed and resulted in the permanent transfer of property from one person to another. There was a price paid which is often not stated and the term ‘gift’ does not mean that the land was freely given. The word ‘grant’ used for a deed was normally used for the transfer of items other than property, such as goods or the right to tithes. (See ‘Old Title Deeds’ by N W Alcock, Phillimore, 2001, page 89 for further details)

The document of 1337 begins in the style of a ‘quitclaim’ with the phrase “Omnibus Christi fidelibus”. This type of deed usually was a disclaimer of interest in a particular property from anyone who might be expected to make a claim in the future, such as a relative. A quitclaim was often made at the same time as a gift to allay the fears of the new owner from future claims over the property from relatives of the seller as in medieval times there was a thought that property should only change hands by inheritance. Under these circumstances it would have been expected for a quitclaim to have been made by Pagan to Richard at the time of the gift and not the other way round. (See the book above, page 91)

In the case of the 1337 document Richard de Strelley confirms that he has enfeoffed land in Kinoulton and Screveton to Pagan and Isabel for a yearly payment of £10 by a previous deed but now he is prepared to waive this yearly amount provided that Pagan and Isabel allow Richard and his heirs to peacefully enjoy the third part of the manor of Woodborough (which was probably part of a previous dower) and do not eject Richard from the property.

Thoroton’s 'Antiquities of Nottinghamshire’, as edited by John Throsby, Volume 3, page 32, states that two parts of the Manor of Woodborough were passed by Pagan to Richard de Strelley in 1335 and also that Alianor, sometimes wife of John de Lyston, passed two parts of the same manor to Richard in the same year. Again this comes about because of the general feeling of land being only passed down by inheritance and all parties who may have a claim to the land are making sure that the purchaser has absolute right to hold the land. According to Thoroton the third part of the manor, which should have descended to Pagan by right of inheritance from his mother Clementia, was also sold to Richard de Strelley.

This deed of 1337 is not the ‘gift’ of this third part of the manor of Woodborough, although there would certainly have been one, but is one of possibly many deeds which made sure that all rights to the land were held by Richard. It could be called a ‘grant’ (the main verb of the deed being ‘concessi’ which translates as ‘I have granted or allowed’). The grant by Richard releases Pagan from his payment of a yearly £10 fee for land in Kinoulton and Screveton provided that he makes no claim on the third part of the Manor of Woodborough which Richard de Strelley and his wife Elena hold.

"The Manor stayed in the de Wodeburg family until 1337 when it passed to Richard de Strelley, son of Sampson de Strelley who built St Swithun's chancel". This is known because the Rev’d W E Buckland, whilst researching the history of Woodborough, which he published in 1896, wrote about this transaction. To the best of our knowledge the documents, which record transactions relating to Woodborough Hall, and are believed to be original documents, are shown below together with transcripts and translations provided by Nottinghamshire Archives. 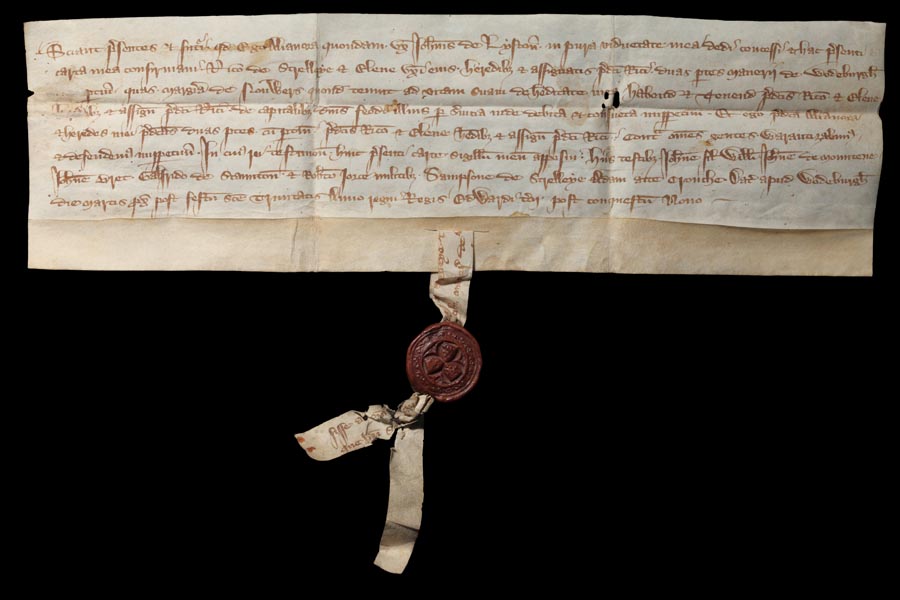 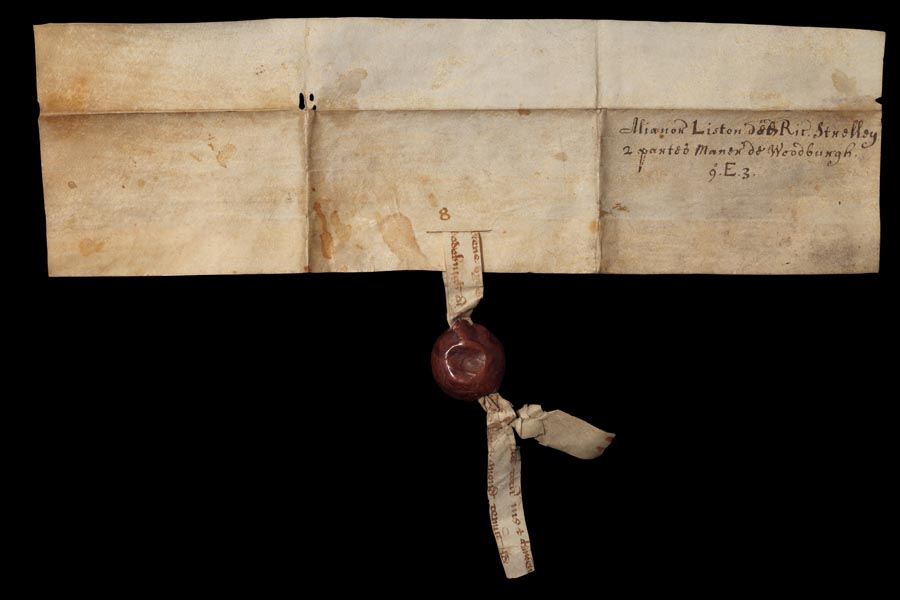 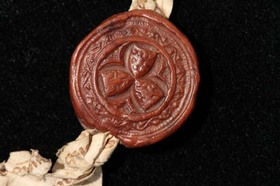 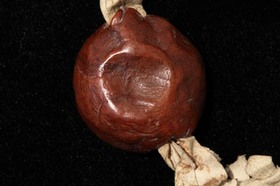 Above left: front of seal -  Above right: reverse of seal 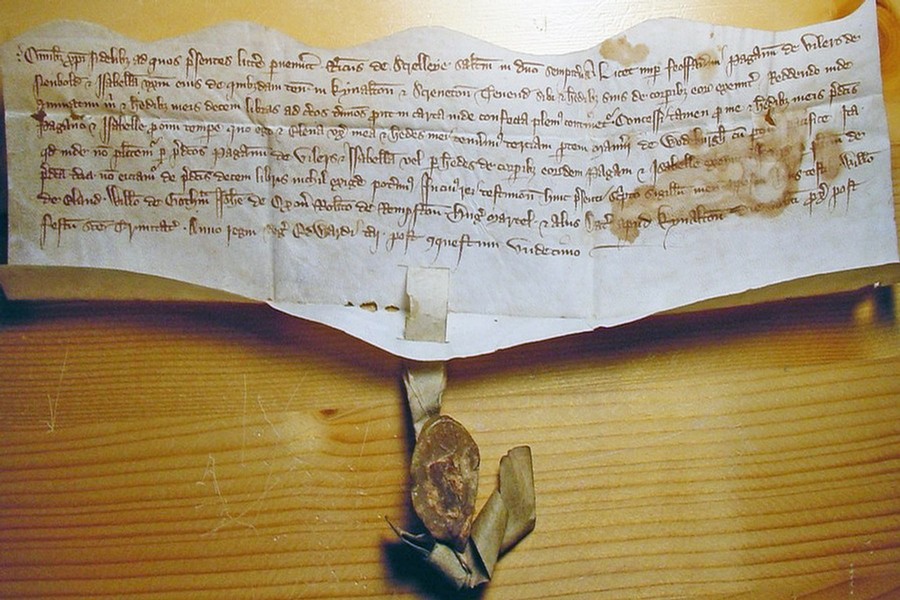 Gift (conveyance) of two parts of the Manor of Woodborough from Alianor to Richard de Strelley and wife Elena, dated 13 June 1335

Translation of this deed:

Know all men present and future that I Alianor formerly the wife of John de Lyston in my pure widowhood have given, granted and by this my present charter confirmed to Richard de Strelley and Elena his wife [and] the heirs and assigns of the said Richard two parts of the manor of Woodborough [*___] which Margery de Nouwers formerly held during her lifetime from my inheritance. To have and to hold to the said Richard and Elena [and] the heirs and assigns of the said Richard from the chief lords of that fee by the service thence due and [of right] accustomed forever. And I the said Alianor and my heirs will warrant and defend the said two parts with its appurtenances to the said Richard and Elena against all men forever. In witness of which thing I have affixed my seal to this present charter. With these witnesses: John son of William, John de Mountene, John Bret, Geoffrey de Staunton and Robert Jorce, knights, Sampsone de Strelleye, Adam atte Crouche. Given at Woodborough on Tuesday next after the feast of Holy Trinity in the ninth year of the reign of King Edward III after the conquest (13 June 1335).

Note¹: Tertiam partem literally means 'third part' (which may have formed a dower).

Translation of this deed:

To all the faithful of Christ to whom the present letters shall come, Richard de Strelleye wishes eternal salvation in the Lord.

Although recently we enfeoffed Pagan de Vilers of Newbold and Isabel his wife of certain tenements in Kinoulton and Screveton, to hold for themselves and for their heirs engendered from their bodies, paying for these tenements to me and to my heirs ten pounds annually at certain terms, as is contained more fully in the charter made in this matter; nevertheless I have conceded, for myself and for my heirs, to the aforesaid Pagan and Isabel, for all the time when I and Helen my wife and my heirs shall have peaceably held the <dower> of the manor of Woodborough with its appurtenances, provided that we are not pleaded against by the aforesaid Pagan and Isabel or by the heirs engendered from the bodies of the same Pagan and Isabel, and provided that we are not ejected from the aforesaid <dower> by the same, we shall be able to demand nothing of the aforesaid ten pounds.

In testimony of which fact I have attached my seal to this present writing, these men being witnesses: William of Eland, William of Gotham, John of Oxford, Robert of Rempston, Hugh Martel, and others. Given at Kinoulton on the next Saturday after the Feast of the Holy Trinity, in the eleventh year of the reign of King Edward, the third after the Conquest.