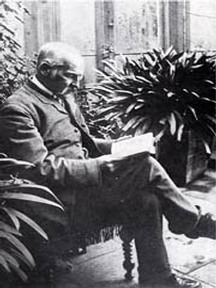 The news of the death of Mr Mansfield Parkyns [pictured left in 1890] in the early morning of Friday, 12th January [1894], was a great shock, for though he had been unwell for several days alarming symptoms only developed on Thursday morning, and an operation performed in the afternoon showed that the case was hopeless.

The late Mr Mansfield Parkyns was born in 1823 and was the younger son of Sir George Augustus Parkyns, fifth baronet, and Charlotte Mary, daughter of the late Mr George Smith of Edwalton. He was educated at Woolwich and at Trinity College, Cambridge. On leaving Cambridge he went for a tour in the East for nine years. No news was heard of him and he was given up for lost. But during those years he was travelling in Abyssinia, Nubia, Sennar, Kordofan and Egypt, living with the natives and adopting their dress and customs.

He then returned to Europe and was appointed attaché to the British Embassy at Constantinople. About 1852 he came to England, at that time bought Woodborough Hall from Mr John Ingall Werge, he was received as one of the “lions” of the day and wrote his book “Life in Abyssinia”.

Having purchased Woodborough Hall he married the Honourable Emma Louisa Bethell, third daughter of Richard, first Lord Westbury, who died in 1877 leaving eight daughters. He was for a time Lieut. Colonel of the Notts Rifle Volunteers and Captain of the Sherwood Foresters’ Militia, but otherwise he took no part in County matters. He was made official assignee to the Court of Bankruptcy at Exeter, and then Comptroller in London, retiring about 10 years ago.

The last years of his life were spent at Woodborough in great retirement, where he devoted himself to his farm and garden and other artistic pursuits. With the exception that he was representative Governor of Woods School he never interfered in village business, but he was always ready to advise and help those who applied to him, giving work to the unemployed and assistance to the sick and poor, hardly realizing himself how much kindness went out from his house in the course of the year. During the last two years he gave a great deal of personal attention to the improvement of Woods School and the restoration of the Church. On Christmas Eve he completed the last work of his life, the beautiful carved oak Choir stalls to the memory of his wife.

He met the surgeons with courage and passed away without pain or fear of death, thanking his medical attendant and showing wonderful love and care for those who were his nearest and dearest. He was laid to rest in the same grave as his wife on Monday, 15th January, with every mark of sorrow and respect. While some are privileged to mourn the loss of a loving father, all now  realise the loss of one who's wide sympathy and genial kindness made him ever ready to help and encourage and whose constant wish was to be at peace with all men.

By A. Mee, Kings of England, Notts.

The hand of a clever craftsman is seen in the poppyhead stalls, their shallow canopies carved with quatrefoils in tracery, and in the reading desks with symbols of the Evangelists; the craftsman was Mansfield Parkyns, who, after a life of great adventure, came to live at Woodborough Hall. He spent two years on the work with the help of two joiners, doing all the designing and most of the carving himself. It was a labour of love in memory of his wife, and it proved to be a memorial to himself, for we read that these choir stalls, the last work of his life, were designed, carved, and given on Christmas Eve 1893 by Mansfield Parkyns. He died on January 12th, 1894, aged 70. He carved the screen across the tower arch, and designed the pulpit. He sleeps outside the church he helped to enrich.

It is remarkable to find in this church the work of so romantic a figure as Mansfield Parkyns. Born at Ruddington [Nottinghamshire] in 1823 of a distinguished line, he inherited the brain, the brawn, and the unconventionality of his family, so it was in keeping with his qualities that, incurring censure for some mild escapade at Cambridge, he should leave without a degree and set off for the East as a youth in his teens. 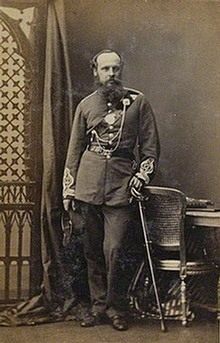 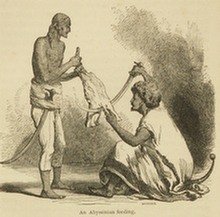 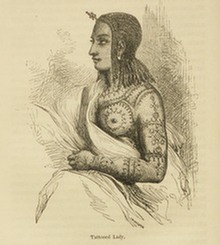 Three years later Sir Francis Galton and a party of friends, after a camel journey across the desert and a voyage down the Nile, reached a collection of mud huts which was Khartoum. They heard of a mysterious European in the town, and going to his hut, entered to find a white man, nearly naked, as agile as a panther, with his head shorn, and with a leopard skin thrown over his shoulder. One of the visitors immediately recognised the seeming Dervish as a fellow student at Cambridge, Mansfield Parkyns! The wild man had spent three years wander in Abyssinia with a freedom and fearlessness which no other man had shown since James Bruce.

With all his wildness and wander-lust, Parkyns preserved a saving sanity. “Of the many travellers of whom I have known” said Sir Francis Galton, “I should place Mansfield Parkyns as perhaps the most gifted with natural advantages for that career. He won hearts by his sympathy, and could touch any amount of pitch without being himself defiled”. He returned to England after an absence of four years, went out to the Embassy at Constantinople [Istanbul], then returned home once more. He wrote an excellent book on Abyssinia confirming many of the amazing stories of Bruce; married a daughter of a Lord Chancellor, made an admirable chief official of the Bankruptcy Court; and, still enjoying a reputation as one of the formidable of amateur boxers, devoted his leisure to wood carving,to geography, and to the propagation of knowledge of native African and Western Asian languages which, with wonderful facility he had mastered during his strange journeying.

An artist in Ethiopia

Parkyns, the author of an autobiographical work, Life in Abyssinia was a perceptive observer who, unlike many Europeans of that time, lived with the Africans he visited and shared their experiences and aspirations.

His drawings, as apparent from these two sketches published in his book, capture the life in an admirable way throwing valuable light on the countries social life.

These drawings were bequeathed to his eight children, many other drawings have not yet been traced.

of the Notts Volunteer Rifles as seen in this 1861 photograph.

Later the NVR became known as the 22nd Sherwood Foresters.