Where does one begin to tell the story of a most remarkable lady? A founder member of ‘Big Society’ her love for her family, friends and community knew no bounds. She led a wonderful life but also enriched the lives of those around her with her vitality, compassion and great powers of leadership and organisation. From very humble beginnings she worked hard to achieve personal success combining family and business roles with many other community and leisure interests.

Shirley in 2005 at the Woodborough Local History Group’s

Feast Supper in the Institute 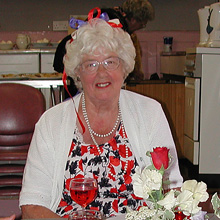 Shirley was born in Morley, Leeds in 1927 where her father, a Nottinghamshire railway signalman, was working. The family returned to Nottingham two years later and lived in Hucknall before moving to the Edwards Lane Estate, Sherwood where they remained for many years. Shirley was the eldest of four children along with May, Frank and Lesley.

She won a place at the Manning School - where she later became head girl, the headmistress noting even then, that she was ‘so willing and public-spirited’. Excelling in the arts, she won a scholarship to University College, Nottingham (as Nottingham University was then known) and obtained a London University BA Hon. Degree in French and German which was awarded to her at the Royal Albert Hall in London in 1949. During this time she was very committed to the Girl Guide movement both as a Guide herself and then as a Guide Officer and Brown Owl.

She qualified as a teacher and went to teach French in Sheffield before returning to Nottingham in 1951 to marry her ex-Mellish soul mate and the love of her life, Keith, whom she had met at St Paul’s Daybrook Youth Fellowship. Daughter Lynne has recently found 300 letters (all numbered!!) written to each other whilst they were separated for two years, he doing his National Service in the Royal Signals at Catterick.

The friendships created at the Youth Fellowship were lifelong. Keith and Shirley were the ‘epicentre’ of that group and it was here that their love of drama unfolded with the St Paul’s Players and productions in the Church Rooms under the guidance of Miss Barrow. Until recently Shirley was still organising reunions for these lifelong friends.

Lynne and then Kim were born in the 50’s and Shirley combined her teaching with motherhood. She also masterminded the St Paul’s Young Mothers’ Group for many years. Lynne can vividly remember a regular sea of mums and toddlers on their back lawn in Redhill. 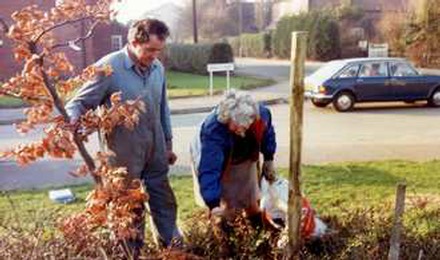 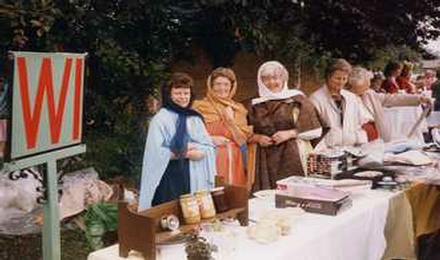 Above left: Shirley and husband Keith planting a Copper Beech tree at the corner of Smalls Croft and Main Street, the tree has matured and remains to this day. Above right: All dressed up for the WI stall at the 1986 Village Street Market, the theme was ‘Domesday’.

In 1964 Keith and Shirley bought a Donkey field in Woodborough and built their own house, the garden room often being referred to as the second village hall. In 1970 Shirley decided to retire from teaching at Nottingham Girls High School and in her own words be ‘a lady of leisure!!

A staunch Conservative, she became actively involved in local politics and her home was always a hive of activity on polling days. In 1970 she stood as the Conservative Candidate for Woodborough and was duly elected to serve on the Basford Rural District Council, a role which she undertook for nine years ending with her being Chairman of the Planning Committee on Gedling Borough Council. She was proud of her involvement in the struggle to get the new village hall, financed and built. She then served on the Parish Council for twelve years until 1991.

Simultaneously she became a Governor at the Col. Frank Seely School and in 1975 she was appointed as Chairman of the Governors, a role which she held for six years. She was proud that she presided over its transition from a Secondary Modern to Comprehensive School and of having the opportunity of serving the cause of education and the local community.

Her resignation from these roles was primarily to give greater support to Keith in the development of Dolphin Textiles Ltd., a manufacturing and importing business that was successfully set up by Keith and run by them and Kim for 27 years.

In 1987 Shirley retired again on reaching 60. Retirement I hear you say - not a chance! The births of her grandchildren were another opportunity for lots of fun and she spent many happy hours enjoying being Grandma to Richard, Paul, Sarah and Laura.

She also set about contacting all her old Manning School mates and a big reunion followed which led to the revival of the Manning Association and bi-annual lunches. The reunions became so successful that they were able to set up a Trust Fund to offer bursaries for Educational Travel Projects to current Manning schoolgirls. This Trust still flourishes today. 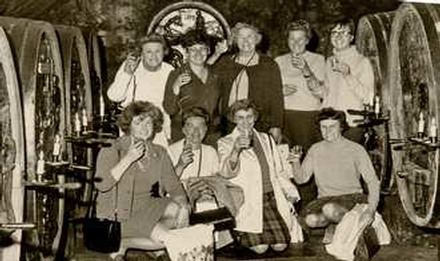 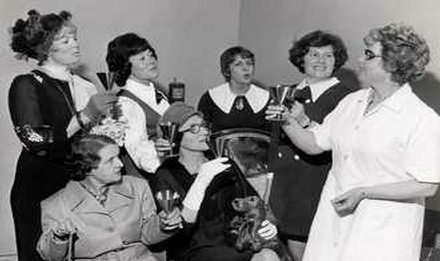 Above right: Shirley performing in a play entitle ‘World without men’. 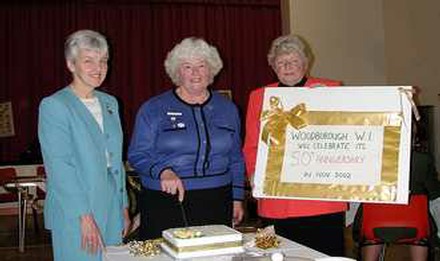 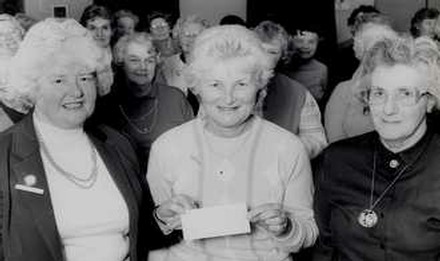 Above left: Presenting a cheque to Skylarks in 1988.

Above right: Shirley as President on the occasion of the WI’s 50th Anniversary in 2002.

By now, Shirley had become deeply involved in many other aspects of Woodborough village life. She was a member of the Woodborough W.I. for over forty years serving on the committee and as President. She was passionate about this organisation and devoted much of her later life to it. We remember well her organisation of the W.I. float in the village’s Jubilee celebrations, innumerable stalls at the village street markets, the drama productions and the Darts and Quiz teams. She loved the global aspect of the W.I. and enjoyed several trips to visit the Landfrauen in Germany created through the twinning of Gedling with Rotenburg an der Fulda, also being enriched by her friendship with Margaret Withers, President of Foxton W.I. in New Zealand. Margaret was able to make two trips to Woodborough and Shirley was in her element as she acted as tour guide on a packed itinerary.

Drama remained one of the great loves of her life and it was very fitting that her last public outing was to see Woodborough Players’ production of ‘Edge of Darkness’ in October. From school days she loved to act and produce and she was thrilled when Lynne arranged for her to meet the great Director John Neville at the Nottingham Playhouse a few years ago. She formed the Three Churches Drama Group in 1982. They performed 16 plays culminating with the ‘Woodborough Story’ which she wrote and directed to mark the millennium. A Historical Pageant depicting the history of Woodborough in 7 scenes, it was performed in St Swithun’s church to much acclaim. She was delighted when Eileen Frier-Kelsey formed the Woodborough Players and she remained a great supporter.

Art was also a passion. From an early age she displayed a talent, winning a ‘Dig for Victory’ poster campaign in the war years. She set up Woodborough Art Club in 1972 and enjoyed many hours painting and organising exhibitions under the guardianship of Dougie Wragg. Her design for the village sign in the Governors’ Field will be a wonderful memorial. 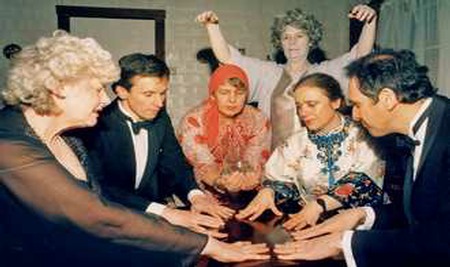 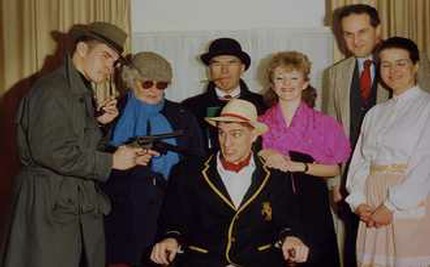 Sport was integral to Shirley’s life, having spent most of her early years pitch-side watching her beloved sports mad Keith playing cricket, football and rugby. She supported Keith in the revival of Woodborough Cricket Club, they were on the village Tennis Club committee for many years and she also loved badminton, darts and then golf too. Lately, she would sit up for hours watching sport on TV and she loved the Formula One racing.

Her Christian faith and commitment to those less fortunate than herself resulted in tireless work at St Paul’s Daybrook and then St Swithun’s where she served on the Parochial Church Council and the Deanery Synod and assisted with Sunday School. She helped to found the village branch of the National Society for Prevention of Cruelty to Children (NSPCC) after a lifelong commitment to this organisation. She organised concerts for Children in Need and she supported Keith in all his fund-raising activities for Sherwood Lions.

She loved to travel and her study was like a travel agency with maps and guidebooks from all over the world. A great Francophile and lover of good food - Friday nights were always ‘out for a meal nights’.

As travelling abroad became more difficult, Shirley and Keith began their discovery of Scotland and fell in love with this beautiful landscape making an annual tour - laced with the odd game of golf. 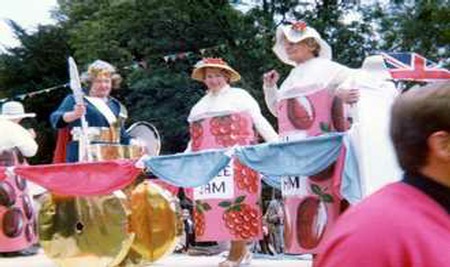 Above left & right: The WI’s float as part of the celebrations for the Queen’s Silver Jubilee in 1977.

An ardent gardener, her knowledge of all matters botanical was encyclopaedic. Lynne and Kim will sorely miss her guidance in this department. She loved her bungalow and garden and when Keith died, her neighbour Ray Brown happily supported Mum outdoors as she dictated operational duties from her chair - or ‘mission control’ as her good friend Cath called it.

The great thing about Shirley is that she was a hoarder - the house was a museum full of discarded props, newspaper clips, records and village memorabilia - including 40 years of village magazines.

Shirley’s last three years were plagued with terrible leg ulcers and horrific pain that prevented her doing the things she loved. She bore that suffering with great stoicism and dignity. She always had hope that she would recover and this positively carried her through her final months. Throughout these last few years, her life was enriched by the support of her many friends.

Shirley was fun to be with and we shall all miss her ‘joie de vivre’. She was a wonderful human being who lived life to the full and gave so much to so many. She will be very sorely missed but she has left a wonderful footprint in this world. 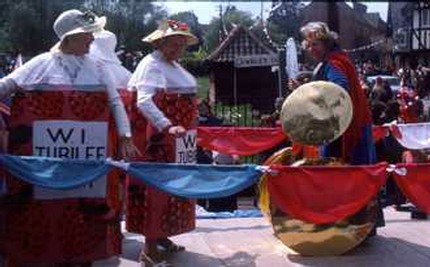