Manor Court: The manor court was the lowest court of law in England (and in other western European countries such as France during the feudal period). It dealt with matters which the Lord of the Manor had jurisdiction over. Its powers extended only to those living in the manor or who held land in the manor.

Basic functions: Each Manor has its own laws listed in a document called the Customable. Anyone breaking those laws would be trialled in the Manor Court. The earlier Saxon method of trial by ordeal or of compurgation was modified by the Normans into the decision of a jury made up of 12 local freemen. The Lord or his steward would be the chairman, whilst the parish clerk would write down the record on the ‘court rolls’.

Collective Responsibility: The entire population of the Manor was required to attend the Court, which was held several times a year regardless of whether any crimes had been committed, so that new ownerships could be proclaimed and local arguments solved.

Villagers were also collectively responsible for catching criminals. The ‘hue and cry’ was sounded when someone had committed a crime, and every villager was required to assist with the capture of the criminal or be prepared to face charges as well. 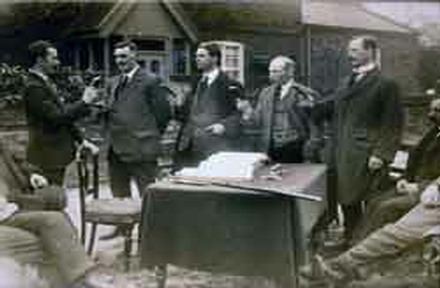 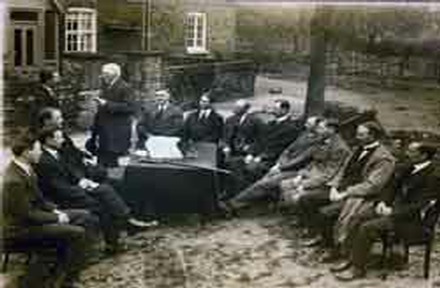 Higher judicial functions: In some cases the Manor Court functioned as a de facto Court Leet. The Manor Lord could be given a post by the central government, such as sheriff or officer in charge of the county, in return for a small payment. In these cases the Manor Court’s jurisdiction could in effect become county-wide.

Alternatively, the Lord could acquire a franchise of the Crown to hold court for criminal matters. This jurisdiction was that of Court Leet and View of Frankpledge (the two terms define the same assembly), the manor freemen being the jury of a ‘crown’ court within the manor’s area.

The Court Leet and Common Land: A number of aspects of open field farming demand a high level of cooperation between farmers. This was particularly true until the mid-twentieth century, when animals were allowed to graze on the open fields at certain times of the year. The mechanism by which these aspects are monitored and regulated is the Court Leet of the manor. Manor courts also sat in many other villages until enclosure did away with the need for communal control of agricultural land.

Farmers work separate strips in the open field. Boundaries between cultivated strips, roadways and sykes (uncultivated grass areas) are marked by simple stakes. The Jury, appointed by the Court Leet, checks each autumn that the common areas of the open fields are in good condition. They report if someone has encroached onto a roadway by ploughing too far, sprayed the sykes with weed killer, or failed to clear a ditch. Infractions are punished by fines. The field being inspected is always the field which was fallow the previous year but which has just been ploughed and sown with winter wheat.

A strict crop rotation is in place in the open fields. Farmers must sow winter wheat in their strips in one field, other cereal crops in the second field, and leave the third field fallow. The rotation means that crops are sown and harvested at similar times of year. In the past, this meant that the fields could be ‘broken’ and animals allowed in to graze on an appointed date. There were lots of presentments to the Court Leet complaining that animals were let onto the fields before the field was broken, endangering the growing crops.

Boundaries between neighbouring strips are marked by deep double-furrows. The Jury uses its local knowledge, and the existence of old boundary stakes, to decide whether the boundary is a true one. Stakes are placed where two strips meet at a roadway or syke. They are supposed to last for three years until the field is inspected again.

In Woodborough the Manor Court Leet has traditionally met at Nether Hall. The bailiff opens proceedings by calling all those who owe suit to the court to draw near. The Steward sits alongside him. Jurors indicate their acceptance of the oath sworn by the foreman by kissing a pocket Bible.

In the nineteenth century all people who occupied land or who held common rights were called to the Court Leet. The suit role gives their names and was annotated to show whether they appeared or essoigned, [an excuse for not appearing at court]. A fine of two pence for not appearing is still collected. A Presentment Paper records the decisions of this Jury, made after their inspection of the fallow field on Jury Day. Common presentments were for ploughing up the Common, for leaving humps of soil on the Common, and for not attending the court.

Farming the land: Farming at this time is dominated by the open fields and their strict crop rotation. Individual strips are owned or occupied by separate farmers, who work the same strips each year.

The strip is sown with winter wheat in the first year and with a cereal crop with the farmer’s choice in the second year. It is left fallow in the third year. Commonly grown cereal crops are wheat, oats, barley, peas and beans. Crops which do not fit into this rotation can be grown in enclosed areas outside the open fields.

Grass is cut for hay in the early summer. The sykes (grassy areas in the open fields) are not sprayed with weed killer or fertiliser and are designated as ‘unimproved grassland’. Traditional wild flowers grow there in the spring.

The fields were ploughed in the autumn and winter after the previous year’s crops had been harvested. Mark Pierce’s 1635 map shows ploughs pulled by a pair of oxen and a leading horse, but by the twentieth century just horses were used. The farmer walked behind and made sure that the ploughing was straight and even.

“Ridge and furrow alike must be exactly straight or else. Bad workmanship on the land was frankly despised, commented on with derision. Always it took two, three or four horses and a fore-horse to slice through particularly deep and solid clay”.

A popular compendium of the time, on farming, went into several editions. Shown here are pages relating to ploughs and furrows. Both swing and wheel ploughs were used in the late nineteenth century. The coulter at the front of the plough cut through the upper layer of the soil and the curved mouldboard pushes it over to the right so that it lies half on top of the previously ploughed furrow. New soil is exposed and weeds are buried.

Although the mechanical seed drill was invented in the early eighteenth century sowing by hand from a bag remained a popular way of distributing seeds. In the background another farmer can be seen preparing to bring a harrow across the soil to cover the seeds.

Traditionally, grains of wheat or corn were loosened from their husks by beating them by hand with a flail (threshing). Threshing was carried out on the floor of barns where the grain was stored. Winnowing separated the grain from the waste chaff. The threshing barn had opposing doors which could be partially closed in order to create a draught to carry away the chaff. Steam-powered threshing machines were introduced in the late nineteenth century. The photograph was taken at harvest time. Sheaves of harvested cereal are arranged into ‘stooks’ to dry for a few days before being taken to be threshed.

The photograph below shows the gentlemen, or members, who attended a Woodborough Manor Court Leet (WMCL) meeting at Nether Hall (Old Manor Farm) on 22nd April 1924. The original caption informs that the WMCL had met for 800 years and this was their final meeting. We now have names for all but one gentleman (the missing name is third person from right front row). No other Woodborough records have been found.

A brief description of a court leet within English Law: it is a court of record held once a year, in a particular hundred, lordship, or manor, before the steward of the leet. Blackstone.

From Wikipedia, we get another explanation of what a court leet was: At a very early time in medieval England the Lord of the Manor exercised or claimed certain jurisdictional franchises. The most important of these was the "view of frankpledge" and its associated police jurisdiction. Some time in the later Middle Ages the court baron, when exercising these powers, gained the name of leet, and, later, of court leet. The quo warranto proceedings of Edward I established a sharp distinction between the court baron, exercising strictly manorial rights, and the court leet, depending for its jurisdiction upon royal franchise.

The court leet was a court of record, and its duty was not only to view the pledges but to try by jury, and punish, all crimes committed within the jurisdiction. The steward of the court acted as judge, presiding wholly in a judicial character, the ministerial acts being executed by the bailiff. The court leet began to decline in the fourteenth century, being superseded by the more modern magistrates' courts, but in many cases courts leet operated until nearly the middle of the nineteenth century.

Elsewhere, court leet survived for formal purposes until their legal jurisdiction was abolished in 1977. The courts were formally abolished in 1998, but the term may still be found in ceremonial use. 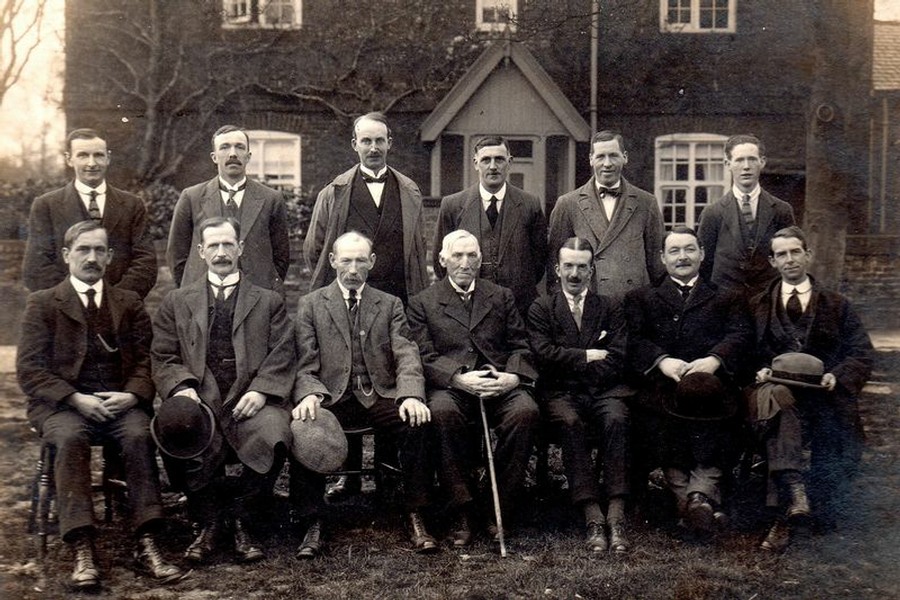