The usual operating distance for village carriers was up to 15 miles which put Nottingham, 7 miles, and Mansfield, 13 miles, within their working radius. From 1815-1912 there were at least two carriers operating services every Wednesday and Saturday from Woodborough to Nottingham.

Nottingham, with its large population and two market days, provided an outlet for the fruit, for which the village was renowned, and for the vegetables grown extensively. The carriers took orders for shopping from the village people, collected the items during the day and delivered them to their customers on their return. Laundry was also brought from Nottingham to Woodborough and was washed, perhaps starched, ironed and returned on the next trip.

The table below shows the carriers, their approximate operating periods, also the pubs, beerhouses or hotels that were their base whilst in Nottingham. The dates were taken mainly from the Nottinghamshire Directories from 1814 to 1936, and their occupations from the Woodborough Census returns from 1841 to 1881. Where the occupation is just ‘carrier’ it is probable that they were also smallholders. Several tried the life of a carrier in the period 1855-1860 but appear to have become quickly disenchanted.

For most people in Woodborough in the 19th and first quarter of the 20th century, the Carriers’ Cart was the only way of transporting themselves and their goods to Nottingham, and on occasions to Mansfield and Tuxford. The four-wheeled carts, usually with larger wheels at the back and smaller to the front, were of a light but robust construction with a wooden framework and canopy to protect passengers and goods from the elements. There was often a tailboard at the back, which could be lowered as an extension, and a railed rack on the roof where trunks and sturdy boxes could be carried. Pulled by either a pair of horses or a single horse, they could travel at a reasonable speed on the flat, but on hills the active passengers were required to dismount, walk up the hill and remount at the top. Rim brakes on the rear wheels or a metal skid under the wheel were essential when descending step hills such as Woodborough Road into Nottingham or Bank Hill on the return journey to Woodborough. 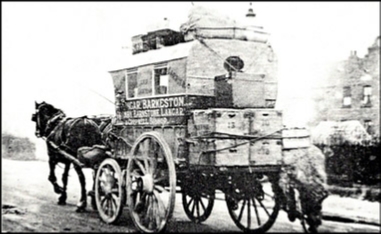 A typical carrier’s cart (van) in the late 19th century

Table 2 above shows the situation had changed by 1894. The immediately obvious change illustrated by this table is the decline of Tuxford.

No carriers seemed to have operated between Woodborough and Newark. Records show that Newark was well supplied by carriers in that area, because as well as being a market town it had good road, rail and river connections. Its distance from Woodborough, 17 miles, would have been an obstacle and in addition the easiest route for horse-drawn vehicles would have been via Lowdham and the Fosse Way would have incurred the extra expense of crossing the River Trent by the old toll bridge at Gunthorpe. Lowdham station, on the Nottingham, Newark, Lincoln line opened in 1846, only 3½ miles distant and thus within walking distance provided the rail link for Woodborough.

The 1878 Woodborough Woods school log book shows that coal for the school was brought by horse and cart from Lowdham station for many years after the school was opened. Mr John Leafe managed to load and cart up to 6 loads of roadstone a day from Lowdham to Woodborough for which he received the handsome sum of four shillings a ton. The carrier service operated in the village until 1941 for goods, but was unable to compete with the new passenger bus service and the growing use of motor lorries by the agricultural fraternity. Villager, Mrs Elsie Leafe, whose husband and father-in-law had been Woodborough carriers since 1902, operated a service until 1941.

The earliest record and traceable Woodborough carrier occurs in Sutton’s Directory of 1814 when John Bish had services to Nottingham on Wednesdays and Saturdays, to Mansfield on Tuesdays, Thursdays and Saturdays, and from Nottingham to Tuxford on Mondays from 1832 to 1853. Monday was market day in Tuxford, but the market appears to have declined after 1853 when John Bish’s service ceased.

Woodborough was evidently supplying produce for a number of markets as in Pigot’s Directory of 1819 four carriers from the village were operating to Nottingham on Wednesdays and Saturdays. According to the 1841 census John Bish and his son John were listed gardener, carrier and cottager. William Ashmore who in directories is listed as a carrier between 1864 and 1871 was according to the censuses licensee of the Punch Bowl from 1861 to 1871 when he moved to the New Inn on Shelt Hill and remained there as licensee until 1891.

The Act of Parliament below, which governs the responsibility of carriers, has been taken from Oranges Directory of 1840:

By 1 William IV cop. 68 [an Act of Parliament] it is enacted that mail contractors, coach proprietors and carriers shall not be liable for the loss of any parcel containing coin, gold or silver manufactured or un-manufactured jewellery, watches, clocks etc; bills, bank notes or securities for the payment of money, maps, writings, title deeds, paintings, plated articles, glass, china, manufactured or un-manufactured silks, furs or lace, where the value of were each parcel exceeds 10 pounds, unless delivered as such, and an increased charge by paid and accepted for the same, of which charge notice is to be affixed in offices and warehouses. Carriers, etc. are to give receipts, acknowledging such increased rates, and in case of neglecting to give a receipt or a fixed notice, the party not to be entitled to the benefit of the act. The publication of notice is not to limit the liability of proprietors etc. in respect of any other goods conveyed. Every office used to be deemed a receiving house; and any one coach proprietor or carrier liable to be sued. Nothing in the act, extends to amend, or in any wise affect any special contract between such mail contractor, stage coach proprietor or common carrier, and any other parties for the conveyance of goods. This act does not protect any mail contractor, stage coach proprietor or other common carrier from liability to answer for loss or injury to any goods arising from the felonious acts of any coachman, guard, book-keeper, or other servant, not to protect any such coachman, servant etc. from liability for any loss or injury occasioned by his own neglect or misconduct.

The work of a carrier was usually combined with some other form of occupation. Small farmers and cottagers, later know as smallholders, would need a horse for the cultivation of their land and would be able to fit in their work as a carrier with that of their agriculture, especially if they had a family to cope with the work at home on the days they visited the markets. Publicans and beerhouse keepers would also have the time to act as carriers. Those carriers who were not engaged in agricultural pursuits were often coal dealers, using their horses and vehicles for delivering coal or collecting road stone, timber, parcels and other goods, often from the local railway depots.

There was a service from Woodborough to Tuxford from at least 1814 until 1848 by John Bish and his son. The minimum distance from Woodborough to Tuxford is 21 miles which would involve a complete day’s journey. If intermediate villages were also served the distances covered would have been greater, with many difficult hills to contend with. It would be interesting to know why the journey to Tuxford’s market was so rewarding. The Tuxford market declined in importance during the second half of the 19th century and this, together with the effort required, probably persuaded John Bish to discontinue his service. His service to the Thursday market at Mansfield seems to have only lasted from about 1822 to 1853. Nottingham may have afforded better and cheaper opportunities for both selling and buying goods and the local villages around Mansfield could have supplied enough produce for its inhabitants.