There are seven fragmented entries in the Domesday book concerning Woodborough two of which also mention Epperstone. References to the land belonging to the church, (i.e. Southwell Minster) and the Clerk (or Priest) of Woodborough who was a Prebend of Southwell. The Wapentake was a district, and Udeburg or Udesburg was an early form or name for Woodborough, also listed are the three manors. The two illustrations below relate to the book not Woodborough’s entries. Visitors to this page are strongly recommended to read David Roffe’s notes about the Domesday book and how to interpret the way in which entries were compiled.

Manor: In WOODBOROUGH Ulfkell had 3 bovates of land taxable. Land for 1 plough. Haldane has 3 villagers who have ½ plough. Value before 1066 and now 5 shillings 4d [pence].

Manor: In WOODBOROUGH Ulfkell had 3 bovates of land taxable. Land for 2 ploughs. He also holds from the King. He has 1 plough and 3 villagers and 1 smallholder with 1½ ploughs. I mill, 20 shillings; meadow, 1 virgate; woodland pasture 2 leagues long and 5 furlongs wide. [Value] before 1066, 20 [shillings]; now 30 shillings. 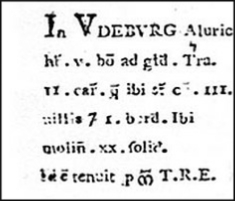 In WOODBOROUGH Helfric has 5 bovates taxable. Land for 2 ploughs, which are there, with 3 villagers and 1 smallholder. 1 mill, 20 shillings. He also held it as a manor before 1066.

Above: A chest in which the Domesday books would have been kept. Centre: Map of Nottinghamshire showing the Thurgarton Wapentake in white, Woodborough and Epperstone are within the white area towards the bottom right. Right: a sample page from the Domesday book.

The following seven entries are for Woodborough and come from the Domesday book. They were included in ‘A survey of the Counties of England, Nottinghamshire edition’ by John Morris. Morris also provides the translations. The last two entries include mentions for both Woodborough and Epperstone. All lands are within the Thurgarton Wapentake.

LAND OF THE [KING’S] THANES

In WOODBOROUGH 7 bovates of land taxable. Land for 2 ploughs. ½ plough in Lordship. 2 villagers and 1 smallholder have 1 plough; it belongs to Southwell.

There also 1 cleric has 1 bovate of land taxable under the Archbishop.

Manor: In EPPERSTONE and WOODBOROUGH Wulfgeat had ½ carucate of land taxable. Land for 12 oxen. Roger has 1 plough and 2 freemen with 1 bovate of this land and 3 villagers who have 1½ ploughs. 1 mill, 5 shillings 4d [pence]; meadow, 3 acres. Value before 1066, 5 shillings; now 1 silver mark.

Manor: In EPPERSTONE and WOODBOROUGH Wulfric and Alfsi (who had) no hall, had 3 carucates and 4 bovates of land taxable. Land for 6 ploughs. Ralph has in Lordship 3 ploughs and 14 freemen with 6 bovates and a quarter of 1 bovate of this land;12 villagers and 10 smallholders who have 6 ploughs.

Many words meaning measurements have to be transliterated. But translation may not dodge other problems by the use of obsolete or made-up words which do not exist in modern English. The translations used here are given in italics. They cannot be exact; they aim at the nearest modern equivalent.

LAND OF ARCHBISHOP OF YORK

This entry was added to a page in Domesday at a later date perhaps after the page or section was completed. The Latin text appears in the border between the edge of the page and the next full entry. 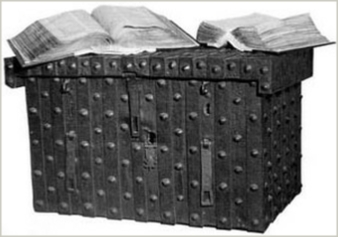 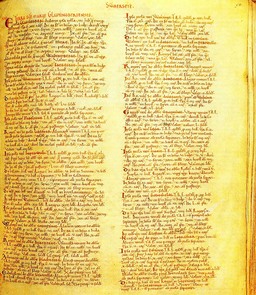 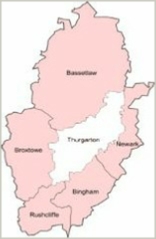