The end of the Field Lane plots can be identified, at the top left side of this photograph there is a small square structure and a row of cottages, the plots were between these buildings.

This plan, taken from the 1876 sale details, shows the exact position of the Field Lane allotments, shown here as ‘Woodborough Poor’. The two buildings shown towards the bottom of the plot have at some time been demolished.

And we the said Commissioners having caused a Ditch or Drain to be made from the Parish of Woodborough through GRIMESMOOR COMMON and through part of a Close and adjoining thereto belonging to Elizabeth BAINBRIGGE called CRINGLE BECKS CLOSE and from thence branching into two distinct drains one of them going between certain Closes called GRIMESMOOR LANE CLOSES on the Southward Side thereof. And the NETHER CLOSES, GRAVES CLOSE and the SNICKLEBRIDGE CLOSES on the Northward Side thereof to a Close belonging to Nathaniel SIMPSON called BURNOR CLOSE and the other Branch going through other part of the said CRINGLE BECKS CLOSE and through the NETHER CLOSES, the INTAKES and the MOOR CLOSES belonging to Elizabeth TOTTIE, Samuel HEYWOOD, William CLAY, Henry HOLLINS, Thomas METTAM, William WYLD, Thomas SMITH, John HOPKINS, Abel SMITH, as Trustee as aforesaid, George HALLAM and Thomas COOPER, James BINGHAM, also- Samuel MORLEY, Elizabeth MORLEY, William REDGATE the Younger, John NEWTON, Charles HALLAM, Humphrey HOLLINS, Francis READ, Mary BAINBRIGGE and William BUTTERY and Elizabeth BAINBRIGGE to a Close belonging to the said Abel SMITH in his own right called THORNDALE CLOSE”.

In those days Woodborough like all parishes of the time had to meet their share of a Poor Law Institution and the land was sold in 1849 to raise the special call made upon the parish for building the Basford Union Workhouse.

The allotments of Woodborough were a source of income for the Woodborough Charities; they are administered by the Woodborough Parish Council, distribution of funds being 'for the poor of Woodborough at Christmas'. Nowadays recipients are generally senior citizens, possibly living alone and without private pension or employment.

Other allotments not linked to the Charities of Woodborough
There were at least three other allotment gardens in the vicinity of Woodborough (shaded green on the map at the top of this page), two plots on Lowdham Lane near Club Houses, one on the north side of Lowdham Lane known as New Lands, the other to the south named Hawley Hill, both are attributed to the Woodborough Male Friendly Society as is one plot of four acres on Roe Hill, these are all recorded on the o.s. map of 1899. (See the article about the Male Friendly Society).

Other allotment gardens (coloured blue) are also shown on the 1899 map recording them on the north-west side of Shelt Hill between the New Inn and Shelt Hill Farm. The plots are known to have belonged to Woodborough Parish Council but when this ownership commenced or ceased is not known.

At the time of Woodborough’s Inclosure in 1795 there were three designated areas of allotments in the parish, Foxwood, Town Lands and Poor Land. Later there were plots off Shelt Hill and Lowdham Lane. The history of the allotments is linked closely with the Charities described elsewhere in this website.

The map below dated 1835 below identifies all the various allotments. From left to right - coloured yellow Foxwood on east side of Foxwood Lane. Coloured light brown Nether Close in the parish of Calverton has been identified as being at the end of Crook Dole Lane and north of Moor Lane. Coloured red - Town Lands for Woodborough Poor, a small plot on the north side of Field Lane. Coloured blue - three plots on the north-west side of Shelt Hill ownership unknown. Coloured green - New Lands on the north side of Lowdham Lane and Hawley Hill next to Club Houses on the south side both belonged to the Woodborough Male Friendly Society. A plot of 4 acres on Roe Hill has not been identified.

Foxwood Allotment Gardens
This land, consisting of 2.29 acres, was left to the Woodborough Parish to satisfy a need for allotments; the description reads "a piece or parcel of land lying in a place called Foxwood (no. 57 on the field map, the 1795 Enclosure Map) containing 2 acres, 1 rood and 20 perches, an area today of 2.377 acres, bounded on the north by land awarded to William Denman, on or towards the east by a Close called Bonor or Bonner belonging to Elizabeth Bainbridge, on or towards the south by lands awarded to John Worton, and on or towards the west by the public carriage road leading to Calverton now known as Foxwood Lane. The fences, for inclosing such pieces of land against the roadway and against the land of John Worton, were to be made and thereafter maintained by the parish officers or owners or occupiers thereof". 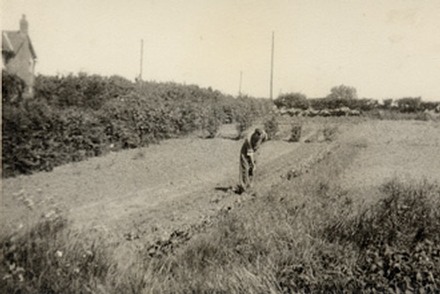 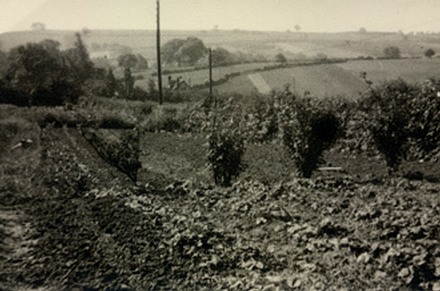 Two photographs of the Foxwood allotments taken in 2001.

Left: Shows views over towards Bank Hill and right: looking east from the entrance gateway.

Town Lands (Woodborough Poor)
There were two plots of land close to the centre of Woodborough Village both to the north off Field Lane, which itself is off Roe Hill. This land, now built upon, is described as follows – one small piece of inclosed land belonging to Eleanor Smith (no.38 on the Enclosure map) consisting of 14 perches, the other small piece of inclosed land belonging to Elizabeth Bainbridge (no.39 on the Enclosure map) also of 14 perches. Also shown on this sale plan as Woodborough Poor. The total size of the land was 1,660 square yards. The Town Lands were sold to a builder in 1968 for £1578. 14s. 10d. 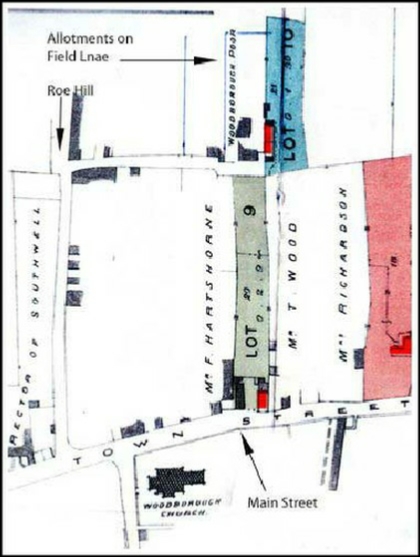 This land has been difficult to identify, but now The Calverton Preservation Society has located the area known as the Nether Closes from their copy of the Calverton Enclosure map dated 1720. The following description also provided by Calverton Pres and should be used in conjunction with the small segment of their map shown below. From this we have identified the plot coloured orange. The end of Crook Dole Lane, which runs through to Calverton Village, is shown top left with double dotted lines and Bonner Lane (grey) bottom left. The three dark solid lines represent dykes, two of which border the plot. Interestingly this plot can still be seen from aerial photographs of the location on Google Earth. The plot is identified coloured orange and the area measures just under 1½ acres which is very close to the measurement given for this piece as 1 acre 1 rood and 13 perches.

Two views of the Foxwood allotments taken in 1950

Left: Looking towards the top with Foxwood Lane on the left. Right: views over towards Bank Hill.

The Woodborough Newsletter reported in July 1965: It has been decided that it would be in the best interest of the Charity to recommend sale of part of the Foxwood Gardens land, and the procedure laid down by the Charity Commissioners is being put in hand. December 1967 a valuation of the Foxwood Garden allotments has been obtained to help the charity trustees and the Council in deciding whether the best use is being made. The matter is still under consideration. This land was left to the village in 1798 and is a registered charity; no decision can therefore be taken without the approval of the village and the consent of the charity commissioners. An opportunity in September 1968 has been taken to include on the agenda of the Parish Council the proposed sale of Foxwood Gardens land which the charity Trustees are recommending should be disposed of by public auction. However, at the Parish Council meeting a recommendation of the Trustees to sell the Foxwood Gardens was not accepted. It was felt that whilst there is a demand for allotments the land should be retained.

November 1969: It is hoped that the response will be sufficient to use the restored land to the fullest extent, but in the event of there being insufficient demand for allotments; the Council may have to decide an alternative use in order not to allow the land to deteriorate to its former state. For this reason applications should be received not later than 31st January 1970.

Foxwood Gardens. It is the Councils intention to restore this land at an early date and to allocate suitable areas for garden use from the 26th March 1970, at a reasonable rent. Parishioners who have not already asked for their names to be placed on the allotment list are invited to apply to the Clerk, who will keep them in touch with the position. 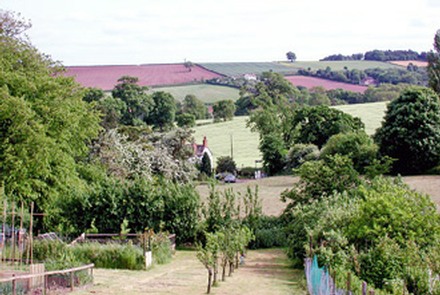 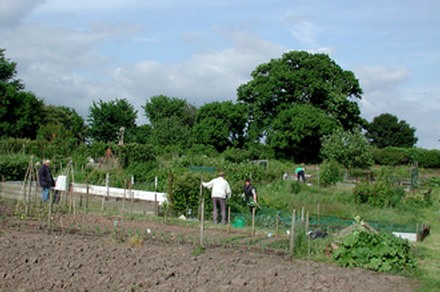 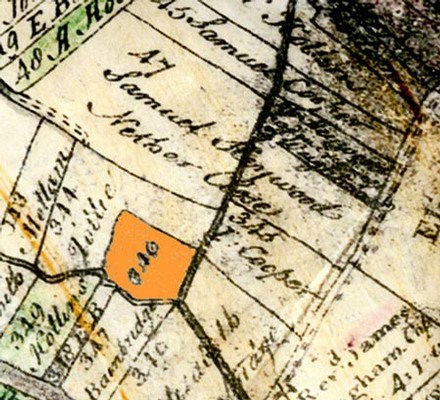 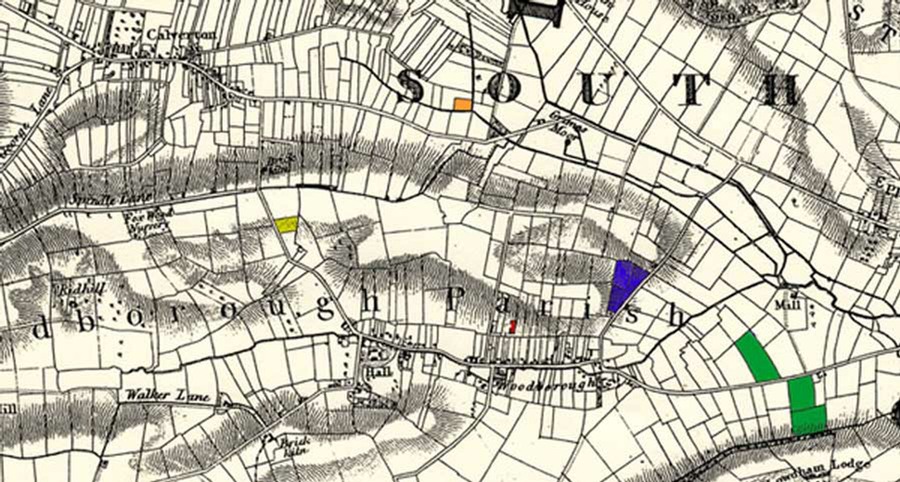 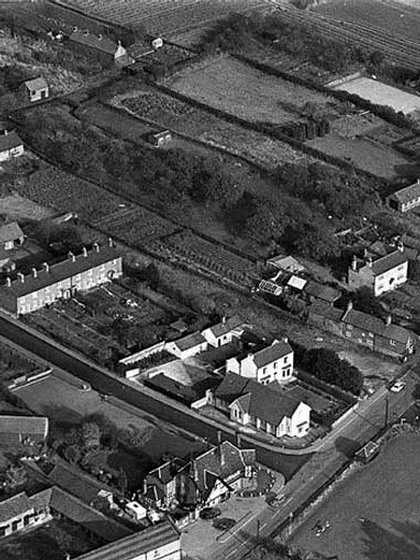