Introduction: This is the first of nine articles covering various aspects of the Woodborough drains, dykes and flooding. Follow the sequence through to get the wider picture.

It might be thought that Woodborough has a poor history of flooding. That is a matter of opinion, to those with property that has been flooded, once is too many. The village does lie in a shallow valley and there is a dyke that runs into the village from the west and exits to the east, it runs the length of Main Street for approximately 1 mile. The section along Main Street was originally described as Towne Dyke. This used to be an open dyke throughout its length and mostly follows the line of Main Street, that is, until housing estates were built in the 1970’s. Some stretches of the dyke are now open and some covered. Other reasons for covering sections of the Main Street dyke would have been to enable the roadway to be widened and pavements added. There are other drains that feed into the Main Street dyke which also has to cope with surface water drainage. 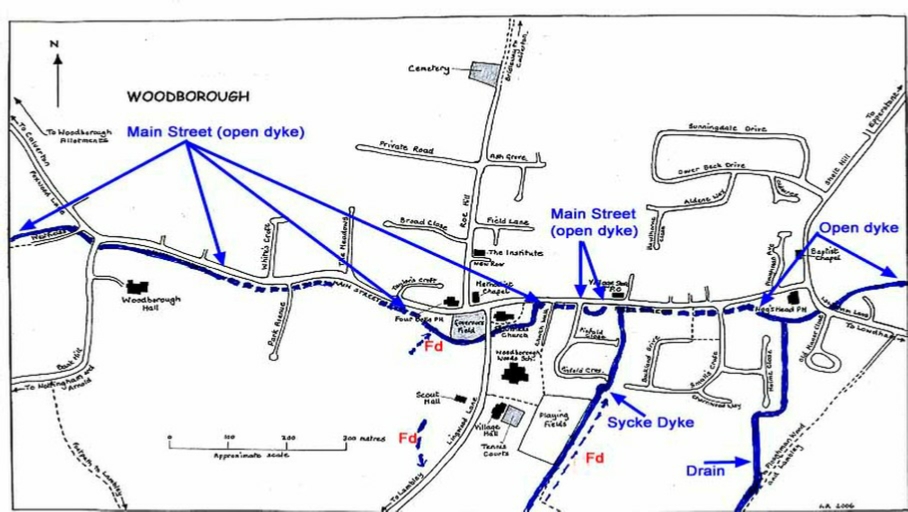 What is the evidence of past flooding? There is photographic evidence back to 1912; there are also the recollections of older residents who remember flooding in their lifetime. Before the two housing estates of Smalls Croft and Pinfold Close and Crescent were built, the meadows upon which they were built flooded mainly in winter leaving standing water for weeks or months. These meadows would act as a flood plain to the dykes. There are also references to flooding in the minutes of the Parish Council and entries in various past editions of the Woodborough Newsletter.