Fox Wood covers 9.24 acres and is probably best known as the site of a hill fort. Archaeological finds suggest that it was occupied into the Roman period but no prehistoric remains have been found. The earthworks are typical of a defensive camp of the period, oval in shape and defended by surrounding ditches and banks giving multiple lines of defence. Additional Fox Wood photographs can be found in our 'Buildings' section elsewhere on this web site.

The earthworks straddle a long ridge carrying a track way, which is also the parish boundary between Woodborough and Calverton. Detail on site is somewhat difficult to establish owing to the wooded nature of the terrain.

Fox Wood is easily accessible by walking about a quarter of mile along the bridleway that runs off Bonner Hill on the Woodborough to Calverton road. The edges of this site are dense with saplings and weeds including bramble but despite this it is possible to make out the ridges and ditches. The wood is less dense away from the edges but inside it has a good number of mature trees and fewer saplings. There are several footpaths criss-crossing the wood and the views are excellent to the north of this ridge looking across Calverton to Oxton and Epperstone. On a clear day looking to the south and southeast it is possible to see Belvoir Castle on the far side of the Vale of Belvoir. It is not difficult to see why Fox Wood was used for defensive purposes. The above view of Fox Wood is from Bank Hill Farm, the woodland crowns a ridge and can be seen centre in the middle distance.

It is thought that the present day woodlands came into existence around the turn of the 18th and 19th centuries. Evidence to support this is taken from two maps. Fox Wood appears on the 1825 County of Nottingham map by T J Ellis. This was produced from survey work carried out in 1824 and 1825. 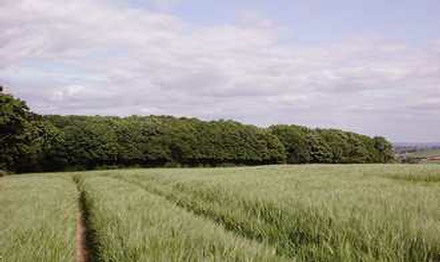 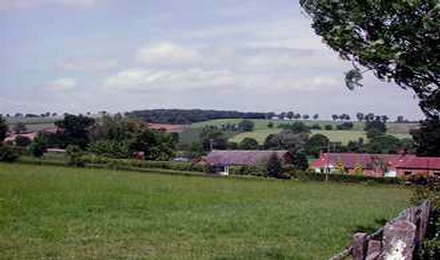 Left: The western side of Fox Wood.  Right: Fox Wood on the distant hill as seen from Bank Hill Farm.

Ownership of Fox Wood has been traced back to the end of the 18th century when the enclosure map showed that the site belonged to the Rev’d Philip Storey. He had inherited the lands of Woodborough Hall Manor, which included Fox Wood, from his cousin Elizabeth Bainbridge. However, the Rev’d Buckland in his "History of Woodborough" traces the ancestry of Elizabeth to Ralph de Wodeburg who was Lord of the Manor in the latter part of the 13th century. From this he conjectures that the manorial lands of Woodborough are those attributed to Ulchel an English thane recorded in the Domesday Book. It is an interesting thought that the Fox Wood site was once part of Ulchel's woodland!

A Fox Wood Dig was the subject of a talk given by Dr Chris Robinson, assistant Archæoligical Officer for Notts County Council, to the Woodborough Local History Group on 17th May 2007 where he began by giving a brief overview of life in Iron Age Britain followed by a more detailed account of the "excavation" at Fox Wood in 2005. It seems the area was first settled several thousand years ago and continued until at least Roman times and probably for some time after. The settlement was agricultural rather than a hill-top fort as the excavation produced evidence (including a gold coin) of farming, particularly the keeping of animals.

Above: A section of 1400 map of the ancient Sherwood Forest

As can be seen from the 1400 Mediaeval Map of Sherwood Forest above, Fox Wood was marked as ‘fox swaht’ and covered an area larger than recent records show. However, there is also evidence to suggest that the site has been old woodland. Fox Wood appears on the Sherwood Forest map of 1609 but more important is the evidence provided by the plants growing there today. These include, wood sorrel, bluebells, yellow archangel, wood millet, dogs mercury, holly and field maple. Also, a variety of species of fungi have been identified which is another indicator of old woodland. 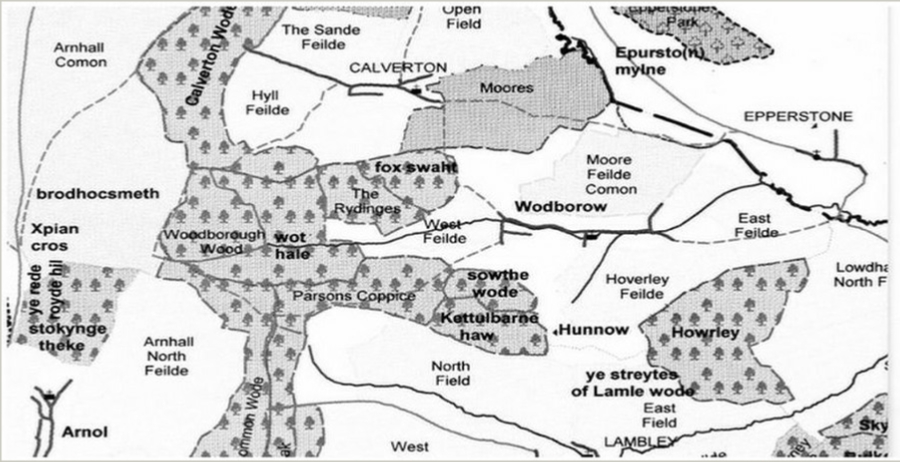 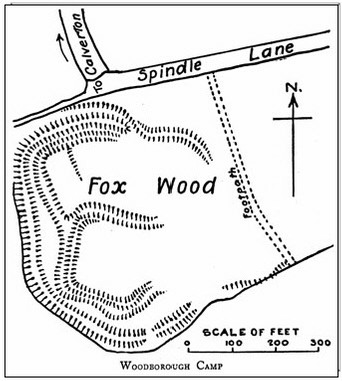