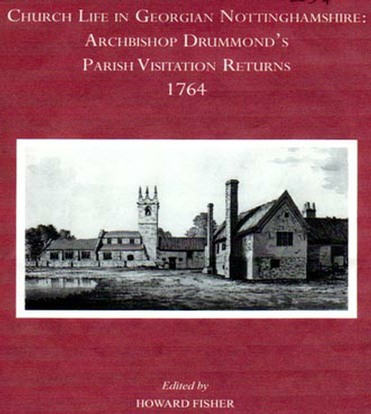 Q1. What number of Families have you in your Parish? Of these, how many are Dissenters? And of what sort of Denomination are they?

A1. We have about 80 Families which consist in men and children about 320 persons. We have no Dissenters of any denomination.

Q2. Is there any licensed or other Meeting-House in your Parish? How many? Of what sort? How often do they assemble? In what number? Who teaches them?

A2. There is no licensed meeting-house in the parish.

Q3. Is there any Publick or Charity School, endowed or otherwise maintained, in your Parish? When and by whom was the School founded? How is it now supported? Who is the Master or Mistress? What number of children, Boys or Girls, are taught in it? In what language? Are they clothed, maintained or lodged? What are they taught? Are they employed in Working, and afterwards put out to Husbandry, Trades or Services? More particularly, is there Care taken to instruct the children in the Principles of the Christian Religion, according to the Church of England, and to bring them duly to Church as the Canon requires?

A3. There is a charity school house built about the year 1733 and endowed with land, now rented about £20 a year, lying and being in the parishes of Blidworth and Stapleford in the County of Nottinghamshire, by the Reverend Montague Wood, to teach the children of the parish to read, write with accounts through the first rules of arithmetic. The present master is Richard Oldacres who is very diligent and skilful in teaching and catechizing the children who are frequently to the number of 60 or 70.

Q4. Is there in your Parish any Alms-House Hospital, or other Charitable Endowment? Have any Lands or Tenements been left for the repair of your Church, or to any other Pious use who has the Direction of such Benefactions? How are they managed? Do you know or have you heard, of any Abuses or Frauds committed in the Management of them? Has there been any Augmentation to your Church by Benefaction, or lot from Queen Ann’s Bounty, and when? Has there been Purchase of Lands, etc. in consequence of that Augmentation? And what does that Purchase consist in, and amount to yearly?

A4. We have had the advantage of Queen Ann’s Bounty procured to our church by the benefaction of the [--] about the year [--] with which money land lying in the parish of Lambley, a parish adjoining to ours on the south, and in a part of it called Lambley Green Lane Closes in the number 3 bounded by the said Green Lane on the east and north sides containing about 40 acres of the yearly rent of about £22 a year improved from about 12 to the present rentage by the present Mr Pugh by his care and management of it.

Q5. Do you reside personally upon your Cure, and in your Parsonage House? If not, where do you reside? And what is the Reason of your Non-Residence?

A5. Woodborough has lost all marks of a vicarage, there is no house or glebe land, the church yard is possessed by one of the prebends of Oxon [Oxton], there is no vicarage tithe. I am not called vicar, but curate of Woodborough.

Q6. Have you a Residing Curate? What is his Name? How long has he been Curate? Is he duly qualified according to the Canons in that Behalf? Doth he live in your Parsonage House? If not, where doth he live? What Allowance do you make him?

A6. I serve it with Calverton by the Chapter of Southwell.

Q7. Do you perform Divine Service in any Church besides your own? On what Days and at what times is Divine Service performed in your Church? If not twice every Lord’s Day, with a Sermon in the Morning for what Reason?

A7. I do not. Service is performed every Sunday alternately morning and evening of late years. It was a great many years without service or a curate for want of any pay. It has only Easter offerings (about one pound a year) belonging to it. The parishioners were forced to hire a neighbouring clergy man to come to baptise the living and bury the dead, see in the enquiry 4th. This melancholy affair coming to the knowledge of Sir William Daws at that time Archbishop of York. He called upon the prebends of Southwell Oxon 1st and 2nd part who had half the of the great tithes of the parish to allow a curate £6 0s 0d a year each of them which is paid at this time, which made up about £13 0s 0d a year for which sum the vicar of Calverton accepted the cure and has served.

Q8. Do you know any who come to Church in your Parish that are not Baptized? Or that being Baptized, and of Competent Age, are not confirmed? Have you Baptized any Adults since my coming to be your Bishop? If you have, I desire you to exhibit a schedule of their Names and Ages.

Q9. How often, and at what times, do you Catechise in your Church? Do you Parishioners duly send their Children and Servants to be Instructed and Catechised? Do they learn any, and what, Expositing, for better understanding of the Church Catechism?

A9. I catechise during the time of Lent publicly in the church and take care that the school master catechises them in school all year.

Q10. How often is the Sacrament of the Lord’s Supper administered in your Church? Do you give open and timely Notice that it is to be administered? What number of communicants are there in your Parish? How many of them usually receive? Particularly how many did Communicate at Easter last? Have you refused the Sacrament to anyone? For what Reason? And how has the Person so refused behaved himself since that time?

A10. I administer the sacrament four times in the year always giving a week’s time at least of notice thereof before it. Last Easter about 40 received. I have refused the sacrament to one person (Sarah Draper) a notorious, vicious woman who has since reformed her life and conversation and I have again admitted her to receive the sacrament often.

Q12. Have any publick Penances been performed in your Church since I became your Bishop? Do you know of any Commutations of Penance made by any of your Parish within the same Time? By whom was it done? For what Money? And to what use was that Money applied?

A12. I have no one, know of no commutations.

If you have met with any particular Difficulties in the Discharge of your Duty:- if you have Discovered any Abuses or Corruptions in any Ecclesiastical Offices:- in general, if you have any Advice to give, or Proposal to make, by which the Glory of God, and the Honour and Interest of our Established Church, maybe promoted, or the Government of this Diocese be better ordered, I desire you freely to communicate your Thoughts to me: and be assured, that no other use shall be made of your Answers or suggestions, that to attain these Ends.

I have met with none. I am very well satisfied in my own mind with our present establishment in our national church and want to make no innovations in it but will continue to endeavour conscientiously to discharge my duty according to the canons, rubricks and the directions of the ordinary I live under praying for your Grace’s health and long life at the head of it.