An earthquake was felt in Woodborough in the early hours of 27th February 2008, it had a strength of 5.2 at its epicentre. There were three more aftershocks but of lower magnitude. All were centred on Market Rasen in Lincolnshire some 40 miles in a direct line from Woodborough. It is thought that only the first tremor was felt in Woodborough. The details of all four tremors are as follows:

Further information can be found on the following website:-
www.earthquakes.bgs.ac.uk/recent_events

From the Nottingham Evening Post – Friday 28th March 1986: It’s been shake, rattle and roll…and residents of a quiet suburb really are quaking in their boots. Four mystery earth tremors in the last month have set their houses shaking. Now people in Woodborough say they are living in fear.

Although no damage has been reported to property, earthquake experts in Edinburgh say: “This area has a history of quakes in recent times.”

“Sound of an explosion”: Residents told how their homes and fittings had been rattled by the quakes, which are preceded by the sound of an “explosion”. Mr Donald Simpson of Main Street described the tremors as “quite frightening.” “I experienced one three weeks ago, then another at 7.30 on Wednesday night. The house shook, there was a rattle of china and it felt as though something heavy had fallen upstairs. “My wife Pearl was in the house a week ago when a tremor again shook the house. There has been no damage at all but we are slightly worried as our house is over three hundred years old.”

Newsagent Mr Alan Bates, whose shop and Post Office is a few doors down from the Simpsons also felt the tremors. He said: “One particular quake was at 5.30 in the morning. I’m normally a heavy sleeper, but it woke me up. The glass and lampshades in my bedroom were rattling. Another quake set all the sweet jars rattling in my Post Office.”

Data: “Most people are worried whether these quakes are damaging property – and so far we don’t know.”

The experts don’t know the cause of the tremors – but they will examine data in the next week”, said a spokesman for the British Geological Survey, in Edinburgh, but he added: “the area has a recent history of quakes.” Some residents are worried that mining could be to blame. Parish Council Vice-Chairman Mrs Shirley Hoskins said: “there always seems to be an explosion first and then tremors”.

‘Terrified’: “People are terrified”. But the Coal Board insists it is not to blame. “Nothing we are doing could cause this,” said a spokesman. Meanwhile, Mrs Doreen Roe of Smalls Croft added: “the quake we had on Wednesday night was the worst. It felt as if the house would split”.

Village to get check on quakes: Families in a Nottingham village who have been quaking in their boots because of earth tremors have been told ……..”help is at hand”.

The reason for the mini-quakes in Woodborough remains a mystery, but now the Environment Department has stepped in. It is hoping to offer improved monitoring services to check on land movement.

The Environment Department has told Sherwood MP Mr Andy Stewart it is considering increased spending on seismic monitoring, which will enable closer checks to be made at Woodborough. Under-secretary Mr Richard Tracey says in a letter to Mr Stewart: “my officials are currently investigating the possibilities of developing an improved National Seismic Monitoring Service to provide instrumental data on a structured basis for the whole country”.

Mr Stewart said: “although these are not categoric assurances, I am confident our recent problems will give Nottinghamshire a priority for the new seismic monitoring service which will be provided in the future”.

Woodborough residents blame increased mining in the area for the tremors that shook the picturesque in March. Coal Board chairman Mr Ian McGregor, in another letter to Mr Stewart, says the tremors seem to have been of a natural origin. “But the NCB (National Coal Board) are, of course, interested in differentiating between natural and mining induced seismicity”, he adds.

The NCB have now asked residents to fill in questionnaires about the quakes. The Environment Department says “the determination of the origin of events can be extremely difficult without a detailed analysis of reports and a close network of seismic monitoring stations”.

Councillor John Andrews, Woodborough’s Tory representative on Gedling Borough Council, said it was necessary to upgrade monitoring in the county, because of the sheer volume of coal mined in the area.

Reported in the Evening Post on 16th May 1986 - following a hole developing in the road on Lingwood Lane and a torrent of water flowing down the road towards the village, Severn Trent Water Authority customer services engineer said, "the water main itself was in good condition and the cause of the burst was likely to have been a ground movement of some kind". Villagers have recently been rocked by earth tremors.

Comment: Close examination of the BGS website reveals there have been few earthquakes that have directly affected Woodborough. Those recorded near Derby and Leicester would have created 'felt' tremors at Woodborough.

Other examples, much further afield in the UK, that could have had minor impacts on Woodborough, include the Bishop's Castle (Shropshire) earthquake on the 2nd April 1990. Therefore the most likely explanation for 'felt' tremors at other times would either have be minor earthquakes both near and far that were too small to register on the measuring equipment used at the time. Or they could have been as a direct result of coal mining activity.

A study of the local map below shows tremors mostly appearing in coal field areas. The National Coal Board at the time would probably deny that its own activities were the cause because of ensuing claims for repairs to damaged property.

Please use the BGS link below for more general information about this topic. [Ed 2007]

From the British Geological Survey, Edinburgh

Julian Bukits writing to us in February 2007 said:-
"you will observe that the recorded activity closest to Woodborough, namely near Oxton, Calverton, Lambley, Joyce Burton and Gunthorpe, were almost all coalfield induced seismic events. The magnitude 1.7 earthquake of 16th March 1983 at Gunthorpe is the only local event to have been noted as having been felt in Woodborough with intensities of 2 EMS. Larger events, such as those that occurred near Derby (1795 & 1957), Mansfield (1816) and Melton Mowbray (2001), would undoubtedly have been felt in Woodborough.

We have no record of any seismic activity in the Woodborough area around 28th March 1986. What was felt by residents of that area may have been as a result of mining activity and too small or shallow to have been detected by our instruments at that time". This information and the map below have been kindly provided, with permission to publish, by Julian Bukits of the British Geological Survey, Edinburgh, 6th February 2007.

11 February 1957 Derby: 'Considering that this was the largest UK post-war earthquake until 1984, and one of the most damaging earthquakes this century, it is curious to see how it has largely slipped from public memory. It was generally felt over the whole of the English Midlands, and was reported from places as far away as Hartlepool, Pwllheli, Norwich and Topsham (near Exeter). Generally speaking, it was not much felt south of Gloucester, and there are no reports known from London.

The epicentre was near Castle Donington, about 10 km south-east of Derby. There was widespread damage to chimneys and roofs in the Derby - Nottingham - Loughborough area, although within this area the damage was often localized - for instance, in Derby most of the damage occurred in a part of the older city about 5 sq km in area. A few people were hurt by falling masonry; one boy in Derby suffered a fractured skull. Damage was caused to Blackbrook Reservoir, about 10 km south of the epicentre, and relays were tripped at several power stations in the area.

There was a substantial aftershock at 23h 59m on 12th February, apparently the only aftershock, which generated further damage to buildings weakened by the main shock. This aftershock was felt from Hull to Gloucester and on the east coast of Norfolk, but strangely enough, does not seem to have been recorded instrumentally'. 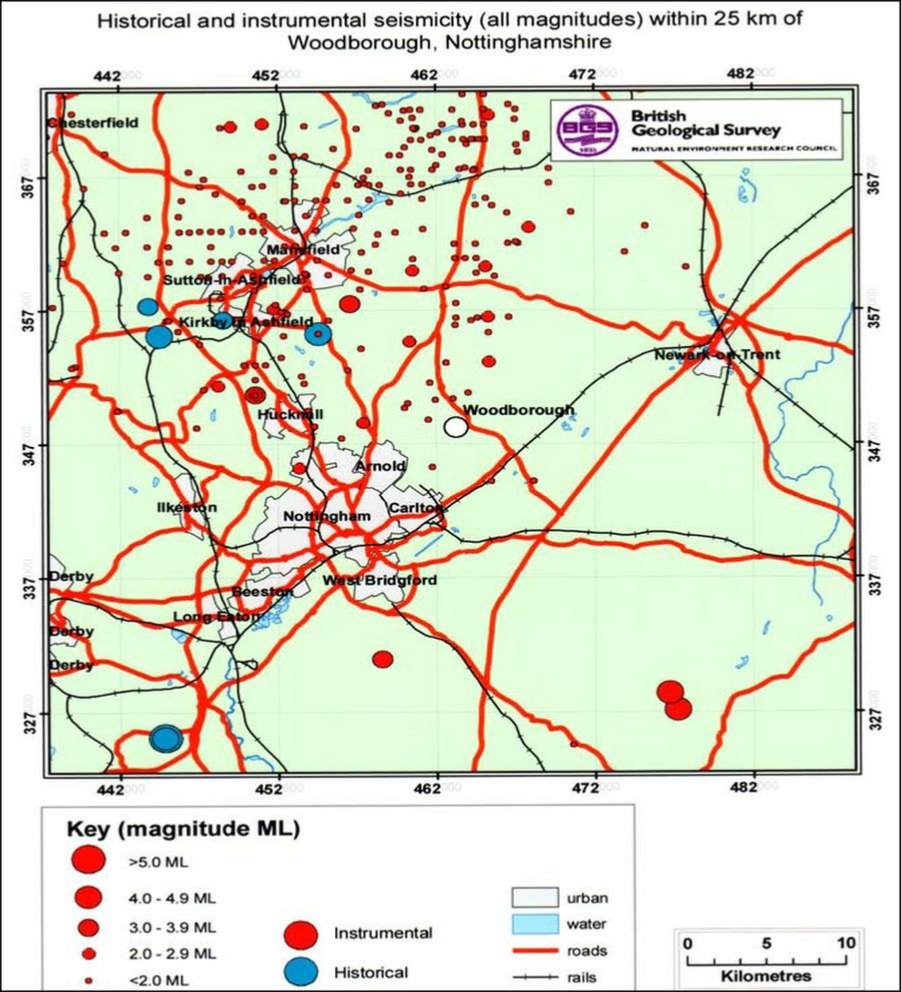