Reported in the News Chronicle, 20th May 1947, German prisoners of war in a camp near here [Woodborough] today watched as men moved furniture from a nearby home into the road. They were perplexed when, last of all, a woman weeping and clutching a baby, was carried out and set down beside her chattels. They brought food from their rations and made tea for the woman and her children – she also had a boy of three. The woman was Mrs Elsie Fox. She had just been evicted (under a Court Order) from Prospect Cottage, which was owned by farmer Edward Exton of Stoup Hill farm.

Mr (Bill) Fox was invalided out of the Army in 1943, the family had lived at Prospect Cottage, paying £1 per week rent. Farmer Exton needed the place for one of his labourers, he took the case to Court and won it. So for twelve hours today until Mr Fox came back from the tobacco factory where he worked, his wife and children sat by the road while the Germans tried to console them. Then this evening with a five-ton lorry, the prisoners moved the Fox’s furniture to a stone-floored Nissan hut at the back of their camp. There are no lights and few windows. The Germans hammered boards over the worst of the holes and found an old oil lamp.

As I helped to push baby Susan’s pram across the hut tonight, Mrs Fox told me, with tears in her eyes: “These Germans have been wonderful. All today they have fed us and looked after us. They are gentlemen”. Mr Fox added quietly: “Today I am almost ashamed of having fought against the Germans in the war”. The Germans do not know whether they have broken the law”.

Footnote by Pauline Lawson: “I remember this incident from the time when I was a child. They lived at the Camp until Mr & Mrs Fox and their two children, William and Susan, were allocated a new council house at 4 Park Avenue, Woodborough, next door to my parents. Later they had another son, Roy.

“They always spoke well of the German prisoners who took pity on them. Mr Fox senior used to cycle, that is until later he had a moped, to the John Player tobacco factory in Nottingham.

“The children grew up and left home and I remember Mrs Fox was in hospital when her husband died aged 71 in 1981. He is buried in Woodborough Cemetery. Mrs Fox had a stroke and eventually went to live in a nursing home in West Bridgford in which she subsequently died. The last time I saw the children was at Mrs Fox’s funeral”.

This segment of the 1955 OS map shows the position of the POW camp (Hutted Camp) relative to Stoup Hill Farm.

The location of Prospect Cottage is adjacent to the road into Woodborough as shown by the arrow. 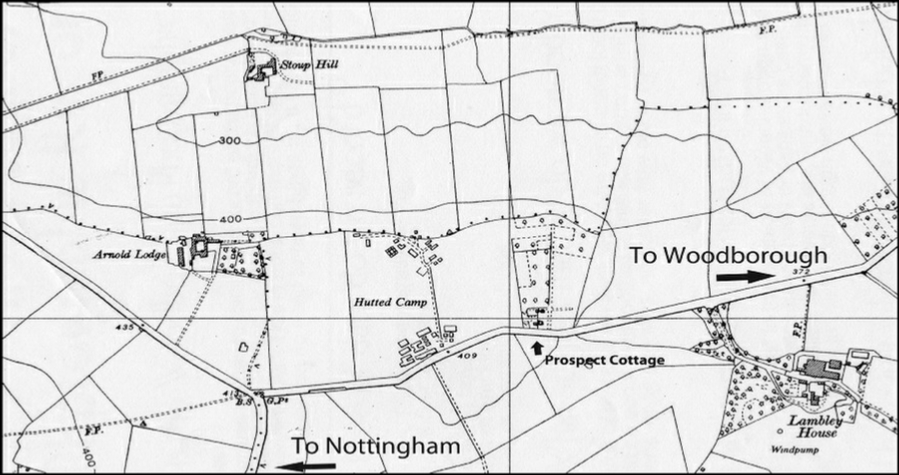