The Woodborough Book Exchange is located within an old red telephone box, about half way between the St Swithun’s Church and the village shop, opposite Pinfold Close. Google Map

“The aim of the book exchange is to provide a free, self-sustaining and ever-changing source of books for people of all ages and interests”.

This is for the whole community and there is a space specially reserved for children’s and young people’s books. It enables anyone to take a book to read, to donate books, or return books when they have been read – there are no rules.

Popularity: The book exchange has been a huge success and was used the very same day it was installed! Within a matter of weeks, all the books that had originally been put in (which were marked with a little yellow sticker to gauge the initial interest) had been replaced by other books. The number of books in the exchange quickly doubled and is now regularly completely full! Little was it thought that the book exchange was soon to make the headlines!

The BBC TV East Midlands Today team came and filmed the exchange on 16th March 2011, featuring people from the village. The story went out on the 6:30 pm show that evening.

How did the book exchange come about? In October 2009, British Telecom decommissioned the two old red telephone boxes in Woodborough, and removed the telephones. A notice had been put in each kiosk, stating that they were no longer viable and would be removed unless a £300 annual payment was made per kiosk, or unless the village adopted each box. Woodborough Parish Council felt they were an historic asset to the village and so adopted them both through the BT Adopt-a-Kiosk scheme for the nominal price of £1.

Catherine Pennington, a resident of Woodborough, recalls the Parish Council minutes of the meeting in January 2010 published in the Woodborough Newsletter stating that they were looking for ideas for how the village could put these telephone boxes to good use. On a previous occasion, Catherine had seen a BBC story about how villagers in Somerset had converted their local telephone box into a library. This struck her as something she could do for Woodborough.

Above left: Oliver & Catherine Pennington cleaning out the telephone box in preparation for shelving to be installed. Above centre: Laura Wardle, Chair of Woodborough Community Association choosing a book from the wide selection on display. Above right: The Woodborough Book Exchange against a foreground of spring flowers.

Catherine approached the Parish Council in May 2010 and presented her idea to convert the telephone box by Pinfold Close into a book exchange. She offered to collect the first batch of books, organise the installation of shelving and to maintain it in the future. They were very supportive and asked her to discuss this with the Woodborough Community Association, who were equally as enthusiastic and offered to pay for the installation of the shelving. She also approached the mobile library service and the Calverton library who encouraged her to go ahead with the project.

She then set about obtaining enough books to put a first batch in. Catherine managed to accumulate about 150 books, all kindly donated by her friends, family and colleagues – enough to half-fill the telephone box shelves. Her neighbour offered to build and put in the shelving and, once installed, she and her husband gave the phone box a good clean. The book exchange was opened in February 2011. 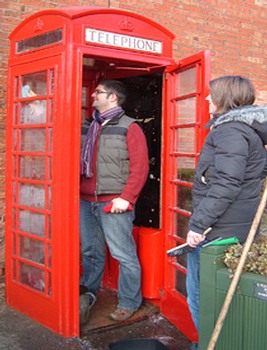 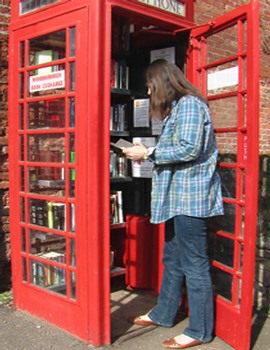 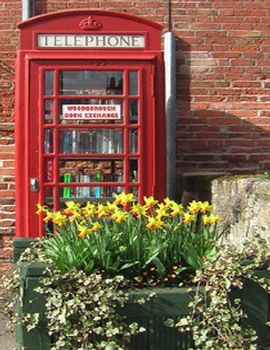 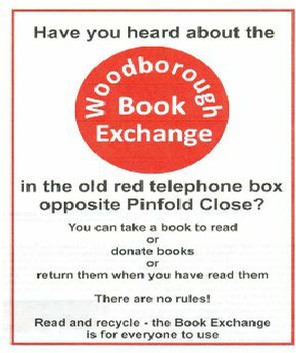