George Brown (sketch left) was born at Woodborough in December 1759 and was baptised at St Swithun's Church on Christmas Day. The Parish Register records his baptism as follows, 'George, son of George and Hanay Brown, stockinger, 25th December 1759'. He was the son of a framework knitter, his brother John also became a framework knitter and the family probably assumed that George would follow the trade, but he obviously had other ideas. He attended Woodborough Woods Foundation School under the Rev’d. Richard Oldacres and is said to have obtained some proficiency in Greek and Latin which would suggest he was an intelligent lad. About 1788 he met Selina, Countess of Huntingdon and apparently, at her request, he became a student at her college at Trevesca, South Wales and remained there for about a year.

So who was Selina, Countess of Huntingdon and why would George Brown attend her college? Her ancestors had held important national positions in the past. She was a descendant of William Hastings who was Lord Chamberlain to Edward IV. He was granted the Manor of Ashby de la Zouch in 1461 and made various additions to Ashby Castle. In 1480 another Lord Hastings began to build a fortified mansion, Kirby Muxloe Castle, with permission to crenellate but it was left unfinished, when he was executed by Richard III in 1483. Henry VIII created the then Lord Hastings, Earl of Huntingdon. At the end of the Civil War Ashby Castle was slighted and the family went to their other seat at Castle Donington and later to Ashby Place, built in 1724.

The names of the first society of Non-conformists in Woodborough 1827 were written, 'the leader was the Rev’d. George Brown'. 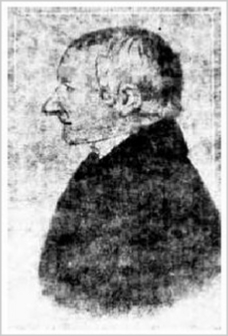 Lady Selina joined John Wesley and formed Lady Huntingdon's Connexion of Non-conformist chapels and she was a prominent figure in the Evangelical revival of the 18th Century.

After George Brown's year of study at the Countess of Huntingdon's college he became an itinerant preacher in the villages. He always went about his preaching on foot and his parish included the counties of Yorkshire, Lincolnshire, Warwickshire, Worcestershire, Herefordshire and Shropshire.

A glowing tribute to him on the centenary of his death in 1933 was written by Woodborough Methodist John Clayton and appeared in the Methodist Recorder. Clayton said George Brown had an extensive knowledge of the Bible, was called a walking concordance and used to sign himself 'well-wisher of the poor'. George must have been a most friendly and likeable person, he tramped from village to village and house to house. In the cottages of the poor and the drawing rooms of the rich he brought to all the good tidings of the Gospel of Jesus Christ. At one time he was away so long on his ministry that friends thought he was dead. A friend Mr Rowarth of Nottingham searched for him and found him in a poor state of health at Worcester and brought him back to Nottingham, but George asked to be taken to his brother John's house at Woodborough where he died on 23rd October 1833 aged 74. 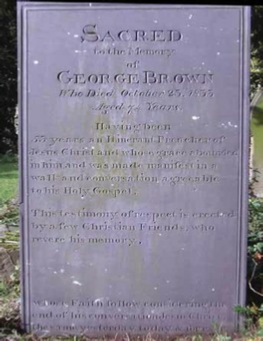 A slate headstone in Woodborough churchyard marks his grave and it can be found in excellent condition adjacent to the dyke opposite the little chancel side door. The inscription says:

Sacred to the memory

53 years an Itinerant Preacher of

Jesus Christ and whose grace abounded

in him and was made manifest in a

to His Holly Gospel.

This testimony of respect is erected

by a few Christian Friends, who

end of his conversation Jesus Christ

the same yesterday today and forever.