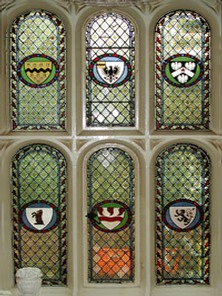 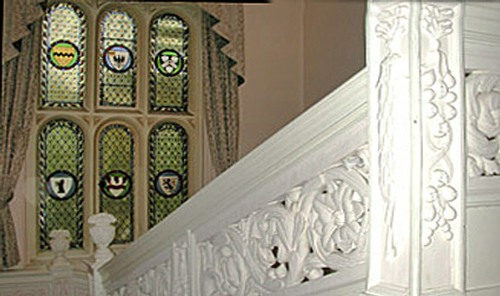 Light one (top left). There is a green roundel with a yellow shield. Blazoned arms as "or, a fesse dancettee sable between ten billets ermine". This was the arms of Parkyns until 1559. Rev’d Buckland describes it as the Ufton Shield referring to when William Parkyns became Lord of Ufton Robert in Berkshire in 1411. The diamond lead panes in this light have alternatively a yellow foliated letter ‘P’ for Parkyns.

Light two (top centre). "Argent an eagle displayed sable, upon a canton or a fesse dancettee between seven billets ermine". Richard Parkyns received a grant of these arms in 1559 (according to Buckland). The letter 'P' appears as before.

Light three (top right). "Sable on a chevron argent between thee eagles displayed of a second, a mullet gules". These arms have not been identified; the letter appears to be a 'C'.

Light four (bottom left). "Argent, a bear salient sable, muzzled and chained or". These arms form part of a shield on a wall monument to Richard Parkyns who died in 1603 in Bunny Church (Godfrey, "Parish churches of Notts", hundred of Rushcliffe). Godfrey attributes these arms to Beresford, and states Richard married Elizabeth, daughter of Aden Beresford of Fenny Bentley. This would fit with the letter ‘B’ in this light. However, another attribution is possible; Sir Thomas Parkyns, 2nd Baronet (the wrestler) married secondly Jane Barnard, and Godfrey blazons Barnard arms as "Argent, a bear rampant sable, muzzled or".

Light six (bottom right). "Argent, a lion rampant, queue fourchee sable". Godfrey ascribes these arms to Cressy. Sir Thomas Parkyns, 1st Baronet married Ann Cressy. The only difficulty with this is that the letter appears to be an 'A'.

It is thought that during Mansfield Parkyns ownership of the Hall the staircase stained glass window was installed since the shields of arms relate to the Parkyns family. The window is three lights wide by two lights high. A photograph and full description of each light is given below and an explanation of the less well known heraldic terms is also provided at the end of this document.

The following heraldic description for the staircase window shields of arms have been added to help give an understanding of some of the less obvious terms: