Until 2008 the church tower contained a wooden frame, which used to hold four bells to which a fifth was added in 1985. The fittings on the larger four bells date from 1896. The treble and second have iron headstocks and the others wooden headstocks. An invoice from Taylor & Co in 1963, quotes a cost of £226.10s.0d for "re-hanging the ring of bells". The bells and wheels were re-painted during 1968 and at the same time a broken tenor bell-stay was replaced.

The numbering of the 5 bells and the weights and other dimensions were correct at the time this article was published in the late 1800’s. These facts will differ from those stated in the later article written in 2008, “Bells Project 2008”, when a sixth bell was added. All five bells were removed prior to this; they were weighed and re-tuned before being returned to the belfry. 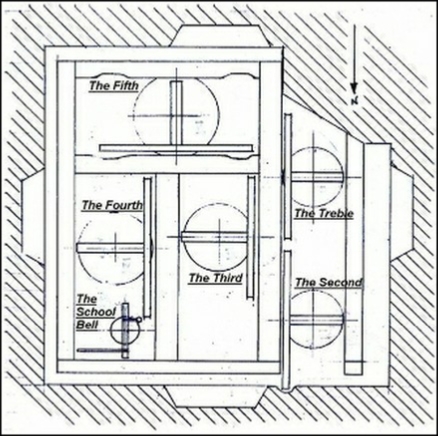 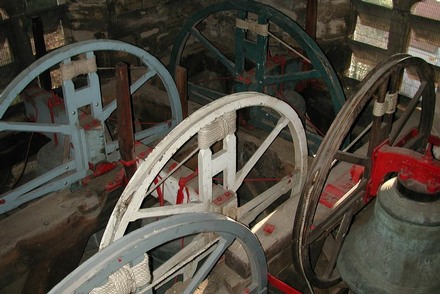 The five bells of St Swithun’s Church in 2000 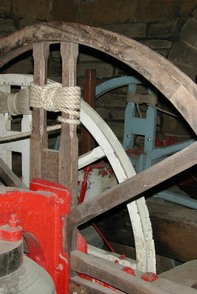 The Treble was originally the second at Kinoulton and was cast by Edward Arnold of Leicester in 1794. It was brought to Woodborough in 1985 and installed by the Southwell Diocesan Guild of Church Bell Ringers to mark the Centenary of the Diocese. It is 29.5" in diameter and weighs about 5wt 2 qtr 5lb. It is inscribed with: Edw. Arnold Leicester fecit 1794. A Burgin & T Pocklingon Churchwardens.

The Second was cast by Henry II Oldfield of Nottingham sometime between 1580 and 1602 and bears the founder's mark. It weighs about 5cwt. and is 29.625" in diameter. The canons are tucked up inside the special headstock made to allow their retention. It has the inscription: GOD SAVE OUR QVEENE, being dedicated to Queen Elizabeth I (1558-1603). It may have been rung to celebrate the defeat of the Spanish Armada in 1588; if this is correct then it was cast and hung between 1558 and 1588. 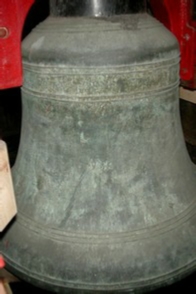 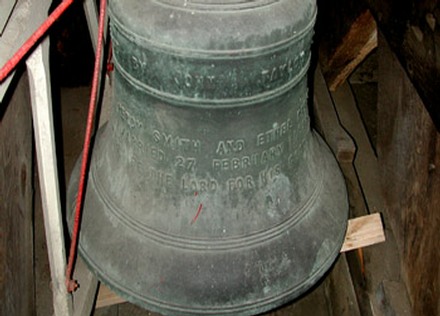 The Third (left) was recast by John Taylor in 1886. The original was made by George I Oldfield. William Stretton, a Nottingham builder and antiquary, who visited the church on 9th February 1818, noted that the bell was inscribed: GOD SAVE HIS CHVRCH 1652. The present recast bell is 31.125" in diameter and weighs 6cwt 3lb and was recast from the old bell for General Percy Smith. It was said in a lecture on the 'History of Woodborough' given by Joseph Marriott in 1892 that the third was cracked before its recasting. The inscription on the waist reads: Percy Smith & Ethel Parkyns, Married 27 February 1886. Praise the Lord for His Goodness. 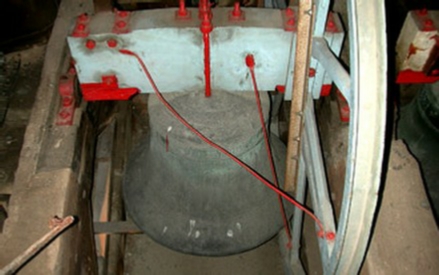 The Fourth (right) was cast by Henry I Oldfield of Nottingham and is the oldest bell in the tower. It was made reputedly in the reign of Queen Mary between 1553 and 1558 and most likely in 1556 when the tower was built. The tone is flatter and less pleasing than others in the tower, but it seems it cannot be re-tuned due to its age; it is thought to weigh about 6cwt. and is 32.375" in diameter. The inscription is: IHS MARIA IOHANES STS. IHS stands for Jesus Hominum Salvator - Jesus the Saviour of Men, Maria Iohanes translates as Mary and St John. STS are probably the initials of the donor, who may have been Sampson Strelley, eldest son of John Strelley, who died without issue about 1560.

The Fifth (left) The Tenor Bell, may have been originally made by William Noone of Nottingham and given between 1666 and 1683 by Charles Laycock. The bell was 36.5" in diameter and weighed 7cwt 16lbs. John Taylor and Co had to recast it in 1896 because of a crack that was just visible and ran for about eighteen inches from lip into the body of the bell. The cost was £30, which was met from village subscriptions collected by Messrs Basilico, Brett, W Hogg junior, M Richardson, E Robinson and Ward. Basilico and Richardson were ringers. Taylor's reproduced exactly the old inscription and ornamentation. It is hung on a wooden headstock. The bell is now about 38" in diameter and weighs 9cwt 5lb (reported at the time as 8.5cwt) and is tuned to G#. 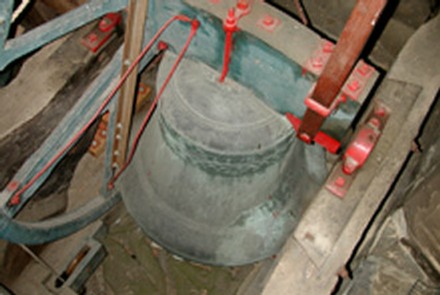 The larger diameter had to be accommodated by carving away some of the wood of the bell frame to give clearance for the widest part of the bell. The recasting date matches the time of the restoration of the tower. Carolvs Lawcock is probably Charles Laycock of Woodborough who died in 1688. The inscription is: DONVS SANCTIS SWITHINIS CAROLVS LAWCOCK ESQ 1680 RECAST (T) 1896.

Tradition of Shrove Tuesday: The Fourth Bell is known locally as 'The Pancake Bell' and is traditionally rung on Shrove Tuesday just before 11.00 am to call local people to the pancake races held on Roe Lane. In days gone by it used to have a more serious purpose. A bell was rung, and still is in some places, in many parishes throughout the land, to call the people to celebrate the public holiday of Shrove Tuesday. The word ‘Shrove’ derived from an old English verb ‘to shrive’ which means hearing a person’s confession. The Shrovetide Bell was rung to call people to present themselves to the priest before whom they would confess their sins and wrongdoings, and make due preparation for the coming season of Lent. It was also the time when households would be using up their extra stores before the fast of Lent, and so pancakes became the order of the day. Mr Mannie Foster has for many years perpetuated this tradition which continues now with Mrs Sandra Smith doing the honours. Originally this task fell to the youngest apprentice from the village.

General History of the Bells: In the late nineteenth and early twentieth century the tenor bell was also known as the 'Passing Bell' as it was rung for a shilling to signal a death in the village. It is noteworthy that the old bell failed when being rung at the death of George Snodin (recorded as Snowden, almost certainly one and the same person) who died on 8th January 1896. Records show that there was a public meeting held on 17th January 1896 at which a letter from Messrs Taylor of Loughborough was read, "estimating the cost of re-casting the Tenor Bell, which cracked a few days ago, at £30". The Tenor Bell is that on which the clock strikes and is used for the Passing Bell and Funerals. The crack, referred to in the above paragraph, has probably been caused by the continued striking of the clock hammer upon the bell whilst stationary. It is a well-known fact that a bell ought always to be in motion when struck "and that more damage is being done to bells by clock hammers and tune-striking than by any other cause". The writer went on to state, "the sound of its deep note is sadly missed, and it is to be hoped that our people will not long allow an old friend who has spoken for 200 years in weal and woe and worship to be silent".

On 20th June 1896 the bells were rung up once more, earlier on the 18th June the Vicar accepted the following as Ringers:- Messrs J Basilico, Gretton, C Hogg, J Richardson, and M Radford. The first duty of the new bell ringers was to toll the Passing Bell at the funeral in September 1896 of Joseph Richardson. The bells were rung for the first time after restoration on October 21st 1897 by Messrs J Richardson, C Hogg, J Basilico and A Harrison as reported in the November 1897 Woodborough Newsletter. The Vicar wrote, "It is a source of pleasure to hear the Bells pealing forth their joyous notes, not only to remind us of the approaching hour of prayer, but also to help us at other times to 'lift up our hearts'".

It is strange to think that William Lee, the inventor of the stocking frame, may actually have seen our bells hung and have heard them ring, and that the Treble and third bells (from the original four bells) were actually rung when England rejoiced at the defeat of the Spanish Armada in 1588 and again at the Restoration of Charles II in 1660 [Ed Woodborough Magazine of 1896]. 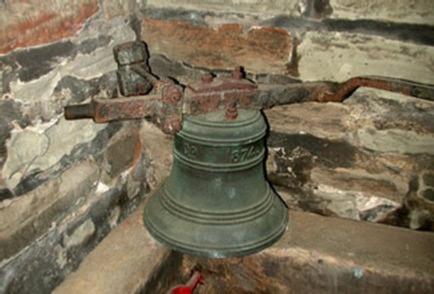 The 'School Bell' (right and below) once hung in the bellcote above the roof of the Victorian 1878 built Woodborough Woods Foundation School. It was taken down, and relocated to the church belfry sometime just after the old school closed in 1968. Later on in 1985 the bell was taken down from the church belfry, to make room for the extra church bell to be installed (as described above). Although the intention was to re-hang the bell, this was not done at that time. The bell was stored in the church belfry un-hung as shown above right. With the aid of a grant from the Woodborough Millennium Festival Committee 2000, which covered the costs of restoration, and a Faculty from Southwell Minster, Tower Captain Stephen Smith has been able to restore the School Bell and re-hang it in the church belfry. 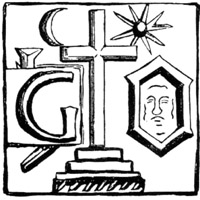 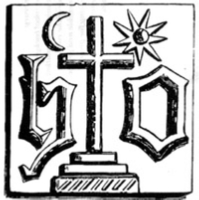 The foundry business of Henry I Oldfield flourished in Nottingham between 1539 and 1748. Four generations are traceable from father Henry, through son and grandson both also named Henry, to great-grandson George. Three of the generations are recorded in St Swithun's belfry. The foundry was in Bridlesmith Gate. The foundry stamp was a Calvary Cross with the founder's initials either side and in the upper part a star and crescent probably borrowed from the town seal. The seal on the left is that of George Oldfield, and Henry Oldfield on the right. 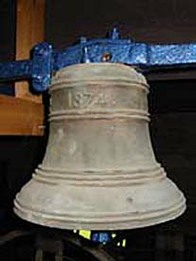 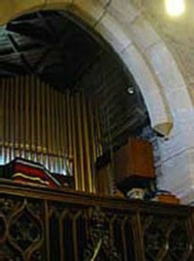 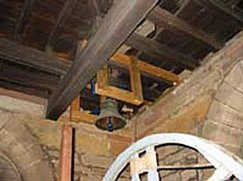 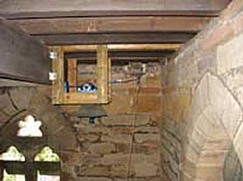 Left, the School Bell. Above left & right newly positioned in the church belfry. Prior to December 2017, the rope came through the Organ Loft (see below). Since the new organ was installed in 2017 the bell can only be rung from the room above the organ loft.

The School bell was cast in 1874 by Taylor & Co, now John Taylor Bell founders Ltd of Loughborough, and was traditionally rung at the start of morning and afternoon sessions at the old School (for additional information see Woods School). Re-hanging was completed in time for it to be rung again at the School Leavers' Service on 17th July 2002. The bell rope comes down from the belfry to a corner of the organ loft from where it can be rung. It now has to be rung from the ringing room above the organ loft. 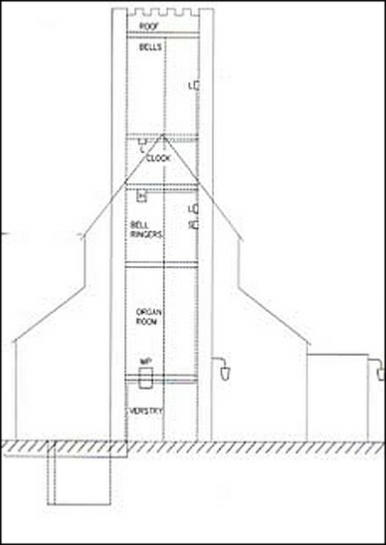 Above right: Belfry plan for the 5 bells seen from above.