The Woodborough Community Association eventually bought the Lingwood Lane building for about £1,000 in 1976; they continue to use it to store items for village events.

A purpose built Telephone Exchange: A short while after World War II in 1950/51 the Woodborough Exchange changed from being manual to automatic, a new exchange was built by local builder Tom Nix and his bricklayer, Bill Haywood, to a standard design [see below right] and the exchange board in the Post Office ceased. The new site on Lingwood Lane, opposite the Old School, housed the new equipment. It is thought initially, two automatic exchange units were housed in steel grey cabinets that measured 9ft tall by 3ft deep. This meant that a larger number of houses were able to have the telephone and numbers were changed to three digits. For example telephone number 7 would become 207 and so on.

In 1965, the General Post office [GPO] was asked to provide a separate line for the telephone kiosk at the east end of Main Street in place of the line at present shared with the Post Office.

Above left: The ceramic tile. Above right: The former Telephone Exchange in 2003

Shortly before the Woodborough Exchange finally closed in 1971, a mobile unit known as a Strowger was brought to the village and sited on the new vicarage lawns. This was only a temporary measure and soon after, the Woodborough Exchange was transferred to the new Calverton Exchange. The next two images represent how the exchange on Lingwood Lane looks in the 21st century.

Post Office from 1864 & Telephone Exchange between 1912-1971 - The Post Office: The first record of a post office in Woodborough was in the 1864 Whites Trade Directory where it stated that Henry James was both a shopkeeper and broker. By 1868 he is recorded as a baker, flour seller, and in 1869 he was a baker, flour dealer and sub-postmaster.

Telephone Exchange at the Post Office: In 1911 Mr Charles Ernest Foster who was also a market gardener as well as being shopkeeper/postmaster was approached by the Nottingham Head Postmaster about having a local telephone 'exchange' if he could persuade six local subscribers to have a telephone. He managed to do this and some of the first subscribers were Burnetts at the Manor, Mr Hill at the Upper Hall, Skipworth's at Thorneywood House and Fred White who had the butcher's shop. The 'piano-type' exchange was in Mr Foster's living room and the only public telephone in the village was in a booth in the shop.

In 1912, Mr Charles Hose Hill, the owner of Woodborough Hall, guaranteed to find ten subscribers so that a telephone exchange could be installed at the Woodborough Post Office. The exchange was a manual board and initially served Calverton, Epperstone and Oxton in addition to Woodborough. In the 1920’s the Woodborough exchange also served Lambley when telephone wires were erected along Lingwood Lane to Lambley.

After Mr Charles Ernest Foster moved to Manor Farm in 1916, Mannie's uncle, James Foster, was the postmaster until 1919. Mannie's younger brother Charles Poole Foster, who had married Miriam Wass, an evacuee teacher from Sheffield, then became shopkeeper/postmaster. The manual exchanged remained in the post office until 1951 when a new automatic exchange was built opposite the school on Lingwood Lane.

Although it is believed that John Foster was the postmaster by 1880, the first record of the post office being run by John Foster was in Wright’s Trade Directory of 1881, where it states “Post Office: John Foster sub-postmaster”.

The Foster family have been postmasters continually in Woodborough for just over 100 years as the following table testifies:

The plaque (right) with the above key dates was presented by the Woodborough Twenty Club to John Mansfield Foster commemorating this fact. 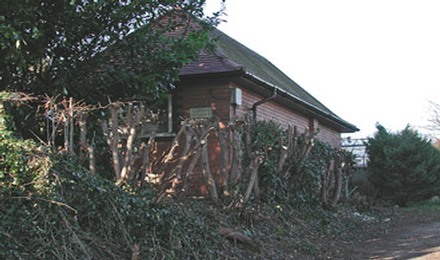 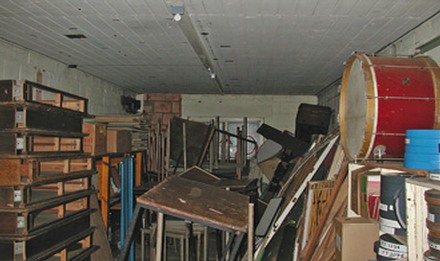 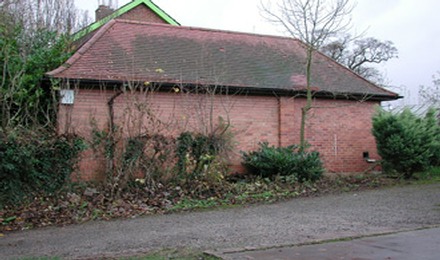 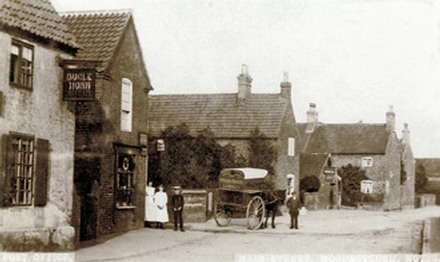 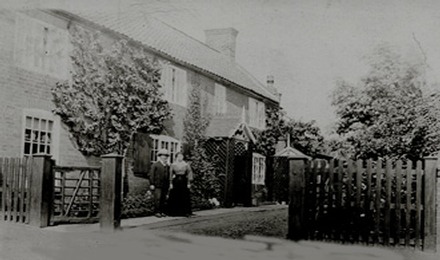 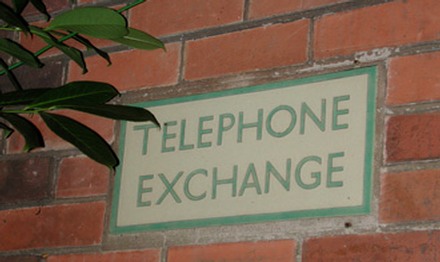 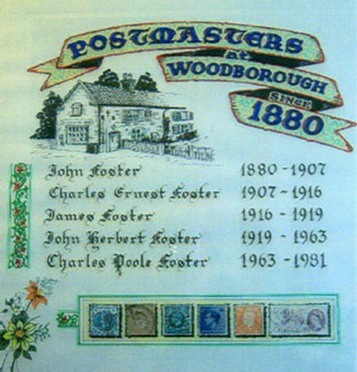