Our knowledge of the Hall's long history is not increased greatly by reading the following article; instead it should be treated as a snapshot description of the Hall as to how the writer found it in 1966. The author and publisher of the article are not known, however, John Isaac Photography Ltd were the photographers. All the accompanying photographs featured in this article were taken by them in 1966 [Ed 2004]. 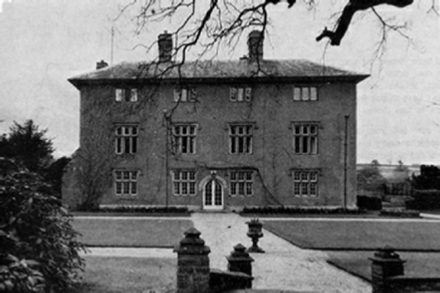 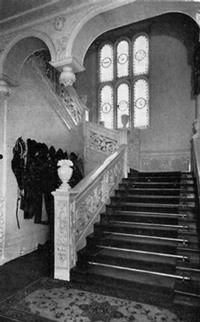 The Hall is situated on the outskirts of Woodborough, which was once a Roman settlement. When this lovely old house was built is not exactly known but one of its first known occupants was a maiden lady, Elizabeth Bainbridge, who was born in 1716 and died in 1798. She was an interesting character and renowned for her benevolence. At her death the house was passed to her cousin the Rev’d Philip Story, whose descendants lived there on and off until 1842.

One of the legends concerning this bell is as follows: Iljun, a famous monk and metal smith, was ordered by the King to cast the bell but had failed repeatedly in spite of every effort, even with wise advice from all over the county. Therefore, not only he but also the King and all the people became greatly distressed. Iljun had lived with his sister who had a five-year-old daughter. One day as the sister was thinking of the problem with the bell a priest knocked at her house to ask for a contribution for Buddha. She asked the stranger, as she habitually asked everyone she met, ‘would you tell be how to complete the bell?’ ‘Nothing could help to complete it other than the sacrifice of your daughter’, he answered and shortly disappeared. She cried and meditated over it all night. At last she made up her mind, to do as the priest had advised and asked her daughter Dong Duk ‘would you sacrifice yourself in order to complete the great bell?’ The little girl nodded her head. Next morning, as she was being thrown into the burning furnace, Dong Duk screamed ‘Eh-Mee-La, Eh-Mee-Le’ meaning ‘my mother, my mother’. Today, if you listen to the bell as it chimes over the countryside, you will be able to distinguish the call of ‘Eh-Mee-Le’.

Round one side of the room are glass cabinets containing amongst other pieces some steamboats in which the Koreans cook sinsillo- which means fairy food. On the shelf above there is a very beautiful noh fan used in ceremonial classical dance, this was given to Mrs Man by a Japanese girl. Each side of the drawing room are two suites. In the guest room, which has a fawn carpet and yellow curtains are twin beds with green candlewick bedspreads and on the two bedside tables are table lamps with white shades edged with green. A large bureau bookcase is on one side of the room and on another is a bow-fronted mahogany chest and a dressing table with a three-sided mirror. The walls of the bathroom are duck-egg blue and the curtains are coral coloured. 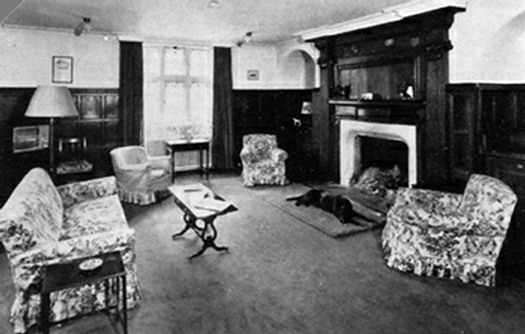 The main bedroom has a pink mushroom carpet, the bedspread, chair and dressing table stool are deepest powder blue frilled with the same material as the curtains, which are white sanitized cotton with bunches of roses.

The sitting room, on the right of the hall, is a very cosy lived-in room. It is half panelled in oak, and has a beautiful open fireplace. On the mantelpiece are two Bali heads and a royal Copenhagen Polar Bear which is the famous sign of the 49th Division. The carpet is olive green and two armchairs are upholstered in printed linen and two further armchairs in leaf-green sanitized cotton. The curtains are in old rose velvet. On one side of the room is a large carved oak sideboard, over which is an array of books. There are two standard lamps which have rose pink shades and several mahogany occasional tables.

Opposite the sitting room is the dining room which has a fawn carpet on an oak floor. The wallpaper in this room has a white pattern of medallions on a Queen Anne green background. The curtains are wine coloured velvet and the seats of the dining chairs are in Regency stripes of wine and cream. There is a two pedestal mahogany dining table and a mahogany side table on which is a pair of silver Korean candelabra. The wall lights have cream shades with mauve fringes.

The General’s study is a very workmanlike room with a large writing desk, usually covered with papers. It has a beige carpet, lime green walls and pink and white striped curtains.

It is hoped that this lovely residence with its old world garden will be the home of the G.O.C.s (North Midland district) for long to come.

Sometime before 1842 one of them removed the gabled and tiled roof and made an additional storey, roofing it with heavy slates. Also during this time the house was let successively to Captain Fenwick, Mr Worth and Colonel Hancock, and after being empty for seven years was bought by Mr John Ingall Werg. This was only the second sale since the Conquest. The third sale was to Mr Mansfield Parkyns in 1852, who was the younger brother of the 5th Baronet, Sir Thomas Parkyns. He was not a great scholar, but he took after his great-grandfather, the celebrated wrestling Baronet. He married the Hon. Louisa Bethell and they had eight daughters. On his death in 1894 the property was divided between them, involving the sale of the house which was bought by Mr Charles Hose Hill.

Up to just before the Second World War the Dowson family lived at the Hall, and after this it was occupied by the Royal Air Force, becoming the Group Commander’s house. Today it is the official residence of the General Officer Commanding, the 49th (West Riding and North Midlands) Division/District.The first G.O.C. to take up residence was Lt. General Sir Richard Goodwin, then Major General T.H. Birbeck who was followed by Major General P.F. Glover. The present occupier [1966] is Major General C.M. Man.

There were several alterations made during General Glover’s time. The front door at the side of the Hall was blocked up and is now in the centre of the front of the house. 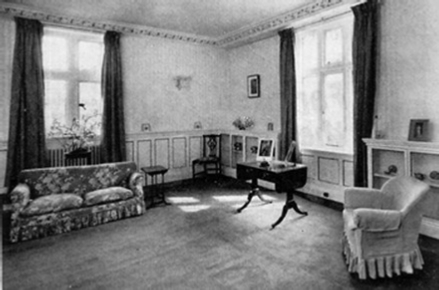 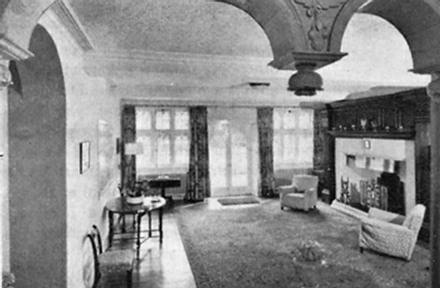 Right: The south entrance and hallway

Part of the entrance hall was made into a dining room. Coming through the glass-panelled door into the square hall one immediately feels the friendly atmosphere. There is a patterned carpet on the oak floor and on the left is a large open fireplace with a splendid array of silver cups on the oak mantelpiece. In front of it are two armchairs upholstered in yellow damask. Near the opposite wall is a gate-legged table above which is a large map, and the standard lamps have parchment shades edged with pink.

One interesting old photograph, now faded with age, is of Mansfield Parkyns and his eight daughters.

On entering one is struck by the beautiful wide oak staircase, carpeted in moss green, which has a heavily carved pine balustrade done by Mansfield Parkyns.

There are four interesting pictures on the stairs and landing which have been lent by the Middlesex Regiment. One is a portrait of Queen Victoria, another the Duke of Wellington, and two battle scenes, one being an incident in the Peninsula War at Albuhera of the 57th Regiment when Colonel Inglis called to his men ‘Die hard 57th, die hard!’ From then onwards the Regiment was known as the ‘Diehards’. The second battle scene is a print of the 73rd Highlanders and the 77th Foot at the conquest of Seringapatam. On the half landing is a wide window with various coats of arms in stained glass.

Each side of the drawing room door are two mahogany card tables. The drawing room is a long, beautifully light room. It is decorated with striped wallpaper and white painted half panelling picked out in gold, yellow damask curtains, a rose coloured carpet and blue linen upholstery with yellow and rose coloured flowers.

Eight wall lights and two turquoise coloured china table lamps, all with cream coloured silk shades, helped to light this attractive room which has a distinct touch of the Orient. Over the white painted mantelpiece is a scroll which was presented to General Man by a Korean general, as was a 150-year-old original painting of a Korean village. There is also a scroll which has been rubbed from the bell of King Sung Duk (33rd King of the Silla Dynasty). This bell, called the bell of Eh-mee-las, is the largest and most beautiful bell in Korea. King Kyung Duk (35th in the Silla Dynasty), who had undertaken construction of the bell to honour the memory of his father, died prior to its completion. In AD 770, this giant bell with its many delicate carvings symbolizing the Buddhist religion, was completed during the reign of King Haegong (36th in the Silla Dynasty). This particular rubbing depicts a lotus carved on the outside of the bell which embraces the flame of a flying dragon. Toward the centre can be seen the figure of a Buddhist angel praying.