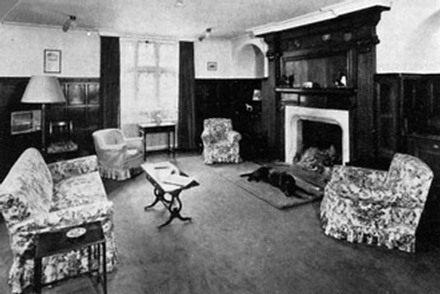 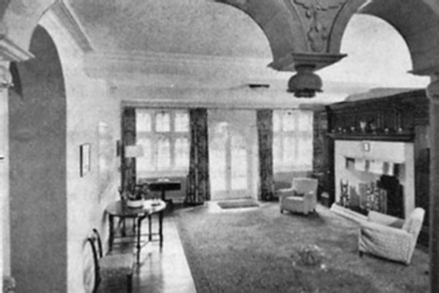 Above left: Mr Mansfield Parkyns and members of his family on the lawns of Woodborough Hall in 1872, and right Mr Parkyns seated in the conservatory in 1890. 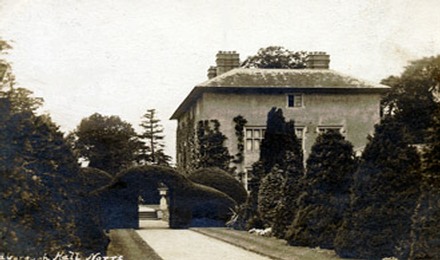 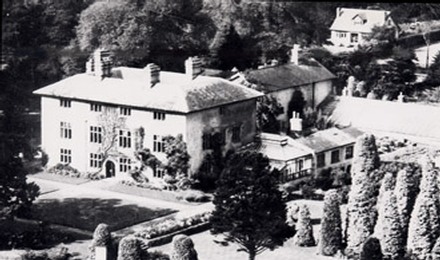 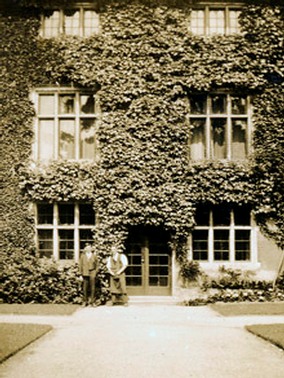 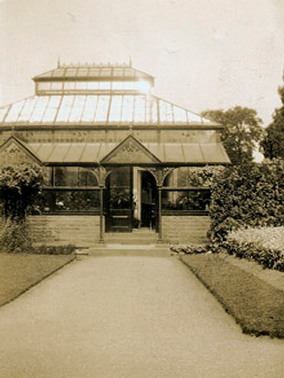 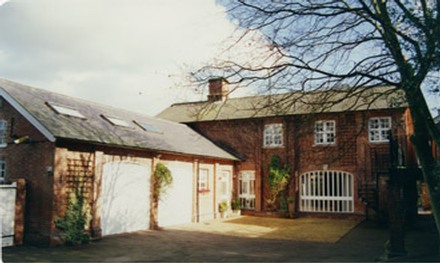 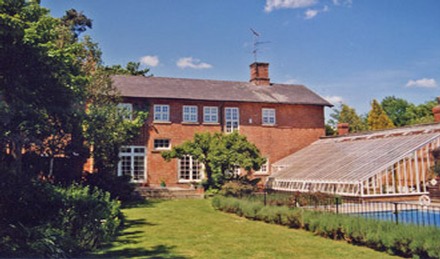 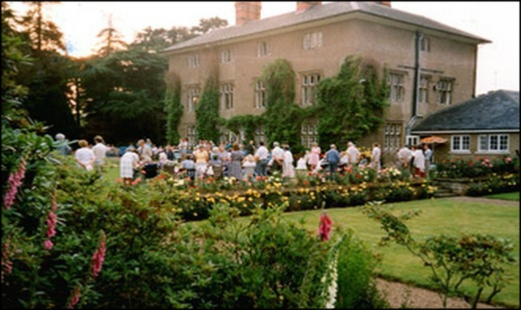 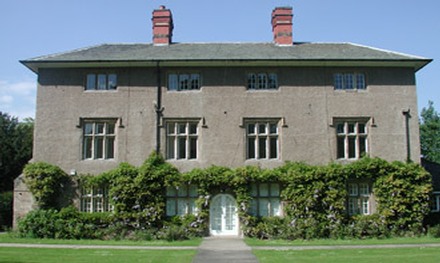 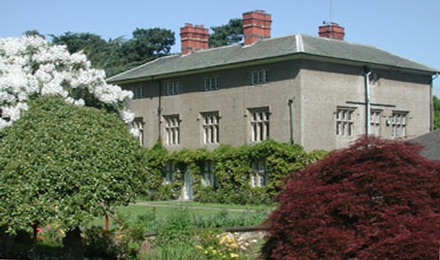 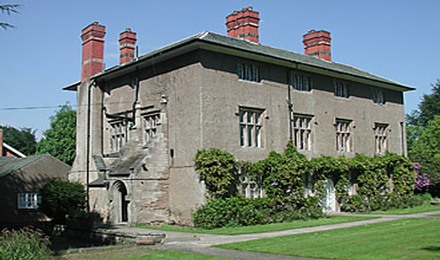 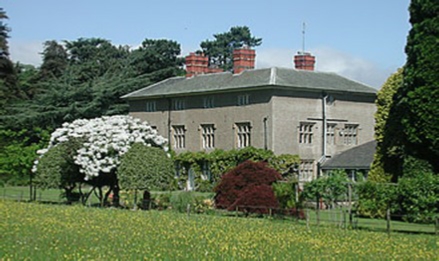 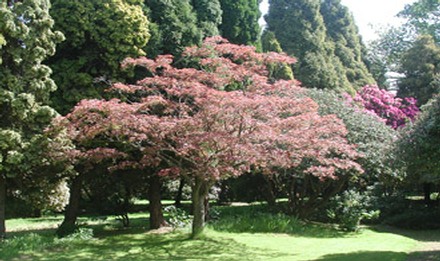 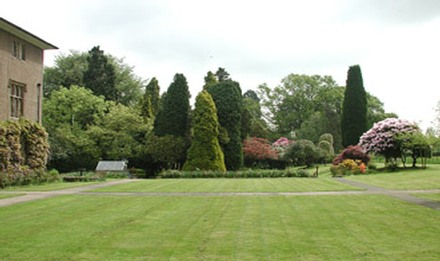 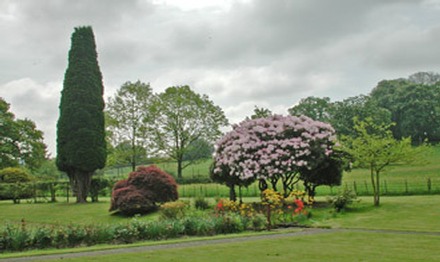 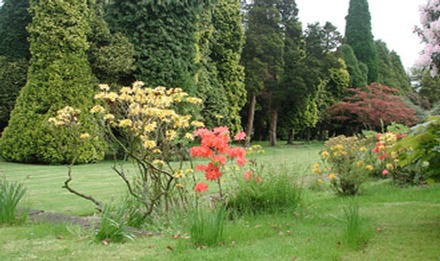 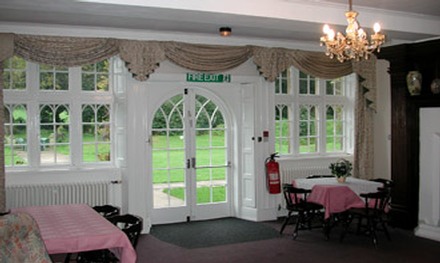 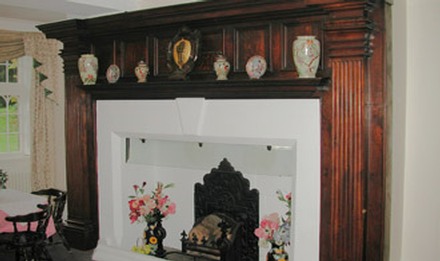 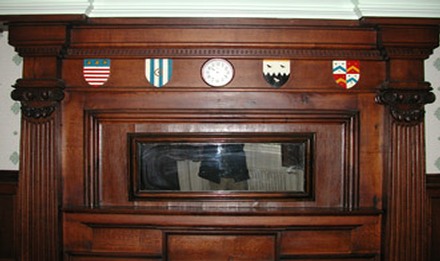 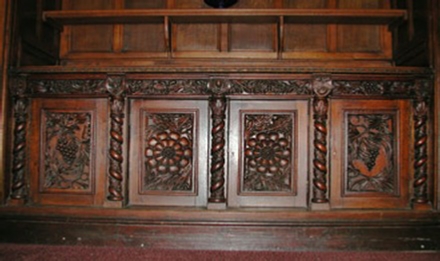 All the digital photographs above were taken by John Hoyland in May 2004 with the kind permission of Mr D Wright, the owner at that time.

• Back issues of the Woodborough Newsletter

• All 2004 photographs by John Hoyland

The main entrance and the fireplace in the hall way, below beautiful wooden furnishings 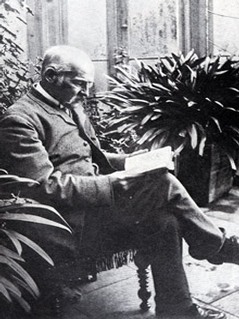 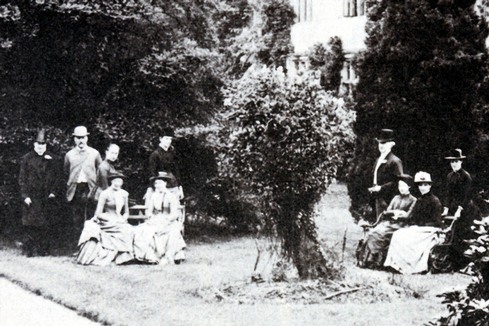 Early History: A feature of the history of Woodborough Hall is that ownership of the land can be traced back to William the Conqueror and it remained in the same hands for some six hundred years up to the Civil War, and branches of one other family for another two hundred years.

The first record of land holding in Woodborough is in the Domesday Book completed in 1086. This showed that Woodborough was included in a very large estate given to William the Conqueror's son William Peveril. He built himself a castle at Castleton in Derbyshire, and one at Nottingham. In Woodborough itself, the principal inhabitants were the Prebend, for the Church property, belonging to Southwell Minster, and three Saxon thanes, Ulchel, Aluric and Aldene, who had manors. Of these it is probable that the site of Woodborough Hall would have been part of Ulchel's manor of four and one half carucates (540 acres). Soon after it seems that William dispossessed them since the land was taken over by Ralf, a Norman who took the name de Wodeburg. The Manor stayed in the de Wodeburg family until 1336 when it passed to Richard de Strelley, son of Sampson de Strelley who built the chancel of St Swithun. It remained in his family until 1622 when it passed to Isabel Bold, whose grandson Strelley Bold finally sold the lands to George Lacock in 1640.

The Manor of Woodborough Hall had therefore belonged to the de Wodeburg’s and de Strelley's for 600 years, but being on the Royalist side in the Civil Wars had probably ruined the last Strelleys. George Lacock was a Nottingham solicitor who probably acquired the mortgage when the family needed money.

George's third son, Philip Lacock, pulled down whatever house was on the site in the 1660's and built a two storey house with a gabled and tiled roof perhaps similar to the present Hall Farm house which has a plaque bearing the Lacock name. Philip died in 1668 and the house later passed via a daughter of the family to the Bainbridge's of whom Elizabeth (1716-1797) who never married seems to have been the best remembered. Her recipe for Fromety (Frumenty) Feast at sheep shearing time is still legendary. To view the Pedigree of the Lacocks, Bainbrigges and the Storys use this LINK

When Elizabeth died in 1798 the Manor House passed to another name, Story. The Rev’d Philip Story was a cousin, second son of her aunt, Ann Lacock who married John Story. During the Story's occupation, the old gable and tiled roof was removed and another storey added, with a new slate roof. These alterations may have been to a design by the noted Nottingham architect T C Hine. It appears that the Story's mostly lived elsewhere and the Hall was let to Captain Fenwick, Mr Worth and Colonel Hancock. After being empty for seven years it was sold in 1842, with 53 acres of land to John Ingall Werg and this was only the second sale of land since the Norman Conquest.

The Mansfield Parkyns era: According to the Rev’d Walter Buckland's History of Woodborough (1897), John Ingall Werg 'invested unwisely', and had to sell up. He sold the Hall in 1852 for £4,500 to Mr Mansfield Parkyns, who also purchased Hall Farm in 1875. At this time, the remaining land of the Story estate was sold, the upper farms being bought by Colonel Charles Seely.

Mansfield Parkyns was the second son of the 5th Baronet, Sir Thomas Parkyns, and as a noted explorer who had spent many years in Abyssinia and Egypt is perhaps one of Woodborough's most famous inhabitants. He went to Africa after being sent down from Oxford University, with the idea of walking across Africa from east to west, from Abyssinia to the Gulf of Guinea. When he finally returned to this country he brought with him his faithful Negro servant who always slept outside the bedroom door to guard his master. Mansfield Parkyns settled happily in Woodborough and had eight daughters. Amongst his talents was woodcarving and examples of his work can be seen in the balustrade to the oak staircase in the Hall, and in the choir stalls of St Swithun’s Church. In 1862, as Lt Col Parkyns, he captained the Royal Sherwood Foresters and as Commanding Officer to the 1st Administration Battalion, Notts Rifle Volunteers which developed into the local Territorial Army regiment.

Above left: Woodborough Hall coach house with the stables converted to garages.

Above right: Right the garden with a Morris & Jones orangery, both photographs dated 1991.

It is quite probable that during Mansfield Parkyns ownership of the Hall the staircase stained glass window was installed since the shields of arms relate to the Parkyns family. The window is three lights wide by two lights high (a full description of each light is given at the end of this document).

He died in 1894 of an illness contracted during his foreign travels. The Hall was sold in 1895 to Charles Hose Hill who also purchased Hall Farm and land. In 1917 Mr Hill set up a proper water system for the Hall introducing piped water from a reservoir in Stanley Wood, which sits on a hill above the Hall. This also supplied Wood Barn Farm on Lingwood Lane and Bank Hill Farm on Bank Hill.

In 1923 the Hall changed hands again, to Mr Hubert Dowson. Both Charles Hill and Hubert Dowson are remembered in the village for the annual Christmas parties for children. The Guide Company would parade on Christmas morning and march to the Hall, where Lady Dowson would present each Guide with a tangerine wrapped in silver paper. It is known that the Hall and grounds were again placed on the market via an auction, which was to be held on the 6th October 1937.

The Military period: Just before the Second World War the Hall was purchased by the Government to become the official residence for the AOC, No 12 Fighter Group at Newton, Nottinghamshire. Occupants of the Hall included the famous names of Trafford Leigh Mallory and Air Vice-Marshall R L M Atcherley and family who left late 1953 for Washington and Air Vice-Marshall W J Crisham CB & CBE and Mrs Crisham succeeded them.

The interior photographed at the time of army occupation in 1966.

Left the lounge and right the entrance hall.

Air Vice-Marshall and Mrs Frazer left in 1958 to take up a post at the Air Ministry, Uxbridge. “They have both been such a help to us all and no village activity has escaped their interest. We shall specially miss them at St Swithun’s. We have always known that they were out of the village if they were not at Church twice on Sunday. I have known the Air Vice-Marshall to be at 9.30 Communion, fly off to one of his units, and be back in Woodborough for Evensong. It is not the usual practice in Woodborough for a parishioner to apologise to the Vicar because he will be away at the next Sunday; without any fuss or ostentation by their regular attendants at the “means of Grace,” they have set an example to us all”.

After the Frazers left the Hall was passed in 1959 from the Air Ministry to the Army. It was the official residence of the General Officer Commanding, the 49th (West Riding and North Midlands) Division/District. The first G.O.C. to take up residence was Major-General Sir Richard E Goodwin, he is in charge of all troops in the area whether Regulars or Territorials. Occupants in succession were Major-General Sir Richard Goodwin, Major-General T H Birkbeck, Major-General P F Glover, Major-General C M Man and Major-General R Gordon-Finlayson. The occupier in 1966 was Major-General C M Man. In 1969 Major-General D A H Toler held the title GOC for the East Midlands Division, followed in 1973 by Brigadier C M A Mayes for Eastern District (Nottingham). By 1976 a Brigadier & Mrs Tugwell arrived, and taking their place a short while later, Brigadier & Mrs Stileman and in 1979 Brigadier R A Plummer. During the Army occupation, bands such as the South Notts Hussars playing in the Hall grounds often enlivened Woodborough Feast celebrations in July. It is not known if the above named represents a full list of occupancy of the Hall.

Hall and the 1991 extension which replaced the old conservatory

Several structural alterations were made in the 1960’s during General Glover's time. The front door at the side of the Hall facing onto Bank Hill was blocked up to create a dining room, moving the entrance to the front facing the lawn.

The Hall then remained empty for some time until sold to Mr Oxby in 1984 for £144,000. The East wing was demolished and the West wing was in very poor condition. Mr Oxby lived in the main rooms of the ground and first floors and converted the second floor into flats. The outbuildings and coach house were also converted into separate dwellings.

In 1988 Woodborough Hall was purchased by Mr Dennis Wright and Mr Gerald Poxton who refurbished the main part of the Hall, restored the West wing and rebuilt the East wing to bring the house back to life in its present role as a residential Nursing Home, which it ceased to be by February 2004.

Left:  the south facing doorway that leads into the entrance lobby.

Right: the magnificent conservatory which was attached to the east side of the Hall. It can also be seen in the 1929 aerial photo above right.